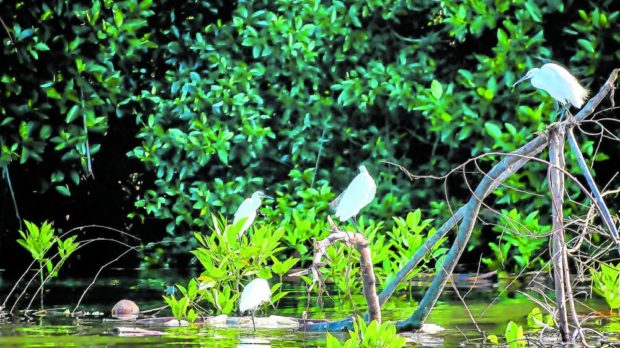 SIGHT TO BEHOLD | Egrets, along with black-crowned night herons and Japanese night herons, are among the sights that tourists can look forward to at the river cruise that the city government of Lucena in Quezon province is planning to include in its set of attractions. (PHOTO COURTESY OF TANGGOL KALIKASAN)

LUCENA CITY, Quezon, Philippines — The city government has launched a campaign to showcase the tourism potentials of its twin rivers — Iyam and Dumacaa — as the route of a floating restaurant that would make stopovers in key areas of the city.

“Our twin rivers have exciting spots to offer to tourists, make them relax from long boredom especially as the COVID-19 pandemic is on its way out,” Mayor Roderick Alcala told reporters here while on a cruise aboard “Bagong Lucena Floating Restaurant” on Tuesday.

The roofed 7-by-12-meter floating venue made of fiberglass, which sails on a 90-horsepower twin engine, is initially offered only for private cruise, said city tourism officer Arween Flores.

“They (renters) just have to hire their own food caterer. They can dine, party and enjoy the views,” Flores added.

The city proper is wedged between Dumacaa River on the east and Iyam River on the west. The two major waterways meet on the southern portion of the city and go directly to Tayabas Bay. Seven other small rivers serve as natural water tributaries.

A study conducted last year led by the environmental group Tanggol Kalikasan (TK)-Southern Tagalog showed that the banks of the waterways near the Tayabas Bay delta are still rich in biodiversity, both in flora and fauna.

Aside from the mangroves, the banks are also home to several native trees and plant species, like cypress, “talisay,” camachile, agoho, “antipolo,” bamboo, and others.

Juliet Aparicio, the city’s planning and development officer and former TK project officer, said villagers had also reported the presence of a swarm of fireflies in some parts of the river banks. “The dazzling flashes of lights can be another tourist attraction,” she said.

Alcala said the twin-river tourism project was a serious undertaking amid challenges posed by the city’s rapid urban development.

In the 1960s, fishers, swimmers, and picnickers used to frequent the two rivers. After several decades, however, abuse turned the rivers into waste dumps.

But the massive mangrove planting in recent years has turned the rivers’ banks into verdant mangrove forests that also protected nearby villages from floods during heavy rains. Flooding often occurs when accumulated rainwater from Mt. Banahaw converges with the surge of seawater from Tayabas Bay during high tide.

The TK study showed some sections of the rivers close to the city proper are heavily polluted, brought on by riverside residents who have long been using the tributaries as a dumpsite for household and human waste.

Alcala said the task to fully rehabilitate the rivers would require the cooperation of riverside settlers.

During Tuesday’s cruise along the two rivers that lasted three hours, several stops were made, including at the St. Isidore chapel situated along the riverbank in Barangay Ransohan, where villagers sold homemade “buko” pie, cassava cake, and souvenir items.

Beside the chapel is a “love lock station,” a takeoff from the love locks made famous in Paris, where couples profess eternal love by leaving padlocks on railings of a bridge and throwing the key into the river.

A fish farm along one of the banks was another rest stop, where folk dances were offered by young villagers. The place would soon sell fresh fish and other marine products, newly caught by village fishers, for tourists to take home, Flores said.

“There are lots of plans to make the cruise more exciting and memorable. We’re just fine-tuning them to satisfy the tourists,” Alcala said.

He disclosed a plan to convert rickety ships left anchored at the former pier at Dumacaa River into souvenir shops for local products.