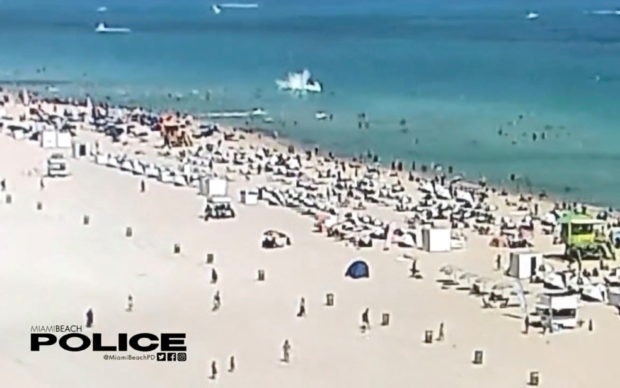 A view of a helicopter crashing into the ocean in Miami Beach, Miami, Florida, U.S., February 19, 2022, in this still image obtained from social media video. Courtesy of Miami Beach Police Department/@MiamiBeachPD/via REUTERS

WASHINGTON — Federal agencies are investigating the crash of a helicopter with three passengers into the Atlantic Ocean close to swimmers and sun bathers in Miami Beach, Florida, on Saturday.

A Robinson R44 helicopter plunged into the ocean close to a crowded beach at 1:20 p.m. local time, the Federal Aviation Administration said. The agency is investigating the cause of the crash with the National Transportation Safety Board.

The Miami Beach police and fire departments responded to the scene and said on Twitter that two of the passengers were transported to a local hospital “in stable condition.”

Video footage of the crash showed the helicopter diving into an area that was full of swimmers.