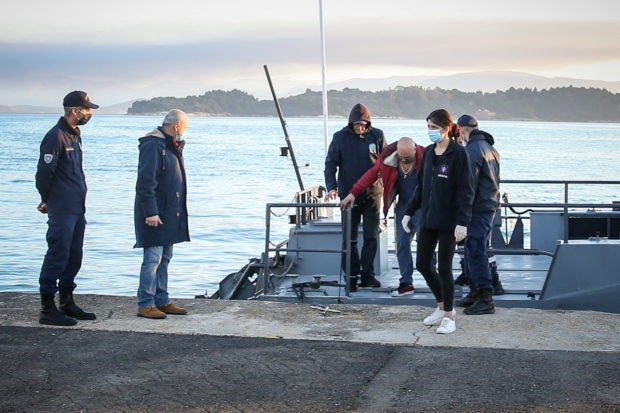 A passenger from Italian-flagged Euroferry Olympia disembarks from a Greek coast guard vessel at the port of Corfu, after being rescued from the ship that caught fire off the island of Corfu, Greece, February 18, 2022. Stamatis Katapodis/Eurokinissi via REUTERS

ATHENS — Eight passengers were missing after a blaze engulfed a ferry sailing from Greece to Italy early on Friday and fire fighters were still battling to rescue people trapped on the ship, authorities said.

A total of 240 passengers and 51 crew were onboard the Italian-flagged Euroferry Olympia when the fire broke out, and rescue vessels had taken most of them to the island of Corfu where ambulances were waiting.

The Greek fire brigade said two men trapped in the ship’s garage had been rescued. Fire fighters were trying to reach another three.

Grimaldi Lines, the owner of the vessel, said eight passengers were missing.

Aerial footage released by the coastguard showed rows of burnt trucks on the blackened deck after flames swept through the 183-metre (600-foot) ferry that had been making a nine-hour journey through the night.

“The worst thing is the cars in the garage are glued next to each other, there is no escape route,” one Greek truck driver, who did not give his name, said after arriving on Corfu.

The cause of the blaze was still being investigated, Greek authorities said.

At least 10 people had been taking to a Corfu hospital, most with breathing problems, a Greek health ministry official told state television, and there were no immediate reports of severe injuries.

Earlier on Friday, passengers huddled in yellow blankets on an Italian rescue vessel as huge plumes of smoke poured out of the ferry, one video showed. The words “May Day” were repeatedly blasting from the speakers, in the footage uploaded on Greek news website Proto Thema.

The ferry sailed from Igoumenitsa, the largest port in western Greece, and was headed to the Italian port of Brindisi. It carried 153 vehicles, many of them trucks, Grimaldi Lines said.

The fire broke out when the ship was near Corfu in the Ionian Sea. Hours after the alarm was raised, the vessel was still ablaze, drifting in Albanian waters, Grimaldi Lines said.

“At around 3.30-4.00 a.m. I smelled smoke,” Rumen Metodiev, a Bulgarian truck driver, told Bulgaria’s BNT channel. “The trucks and the documents, everything burned. There was no chance to put out the fire,” he said.

Bulgaria’s foreign ministry said 127 of its citizens were on board.

Grimaldi Lines spokesman Paul Kyprianou told Reuters that there were indications the fire started in one of its holds. The company was making every effort to help the passengers – most of them from Bulgaria, Romania and Turkey – get home, he added.

“The flames were incredibly high, we were a few miles away from the ferry when it happened,” Colonello Felice Lodovico Simone Cicchetti from Italy’s financial police, who took part in the rescue operation, said.

“The fire was so big and fast that in a matter of five minutes it became unmanageable for the people aboard.”

In 2014, 10 people were killed when the car ferry Norman Atlantic carrying 466 passengers and crew caught fire while sailing from Greece to Italy.