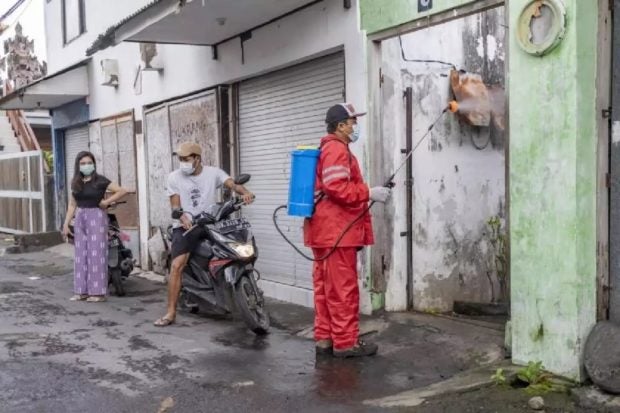 JAKARTA – Indonesia said on Monday (Feb 14) that it plans to cut the quarantine period for travelers – both foreigners and citizens who have had a booster shot – from five to three days with officials pointing to signs of a slowdown in Covid-19 cases.

he new rule will take effect “starting on March 1, or earlier” depending on the situation, and quarantine may be lifted on April 1 if the situation further improves, said Mr Luhut Pandjaitan, the senior minister in charge of coordinating Covid-19 efforts on the country’s most populous island of Java as well as Bali.

“Signs that we have reached the peak are there, judging from the decline in daily new cases, active cases and hospitalisation rate,” Mr Luhut said at an online media briefing after meeting President Joko Widodo on Monday.

“Java and Bali are now seeing a slowing trend (in the number of daily new cases), but some (other) regions outside Java started to see a pick-up.”

At the same briefing, Coordinating Minister for Economy Airlangga Hartarto said the travel bubble for visitors from Singapore to Batam and Bintan will start on Feb 18, and the quarantine-free arrangement will extend to a third island, Karimun. However, he did not give any other details.

Singapore Transport Minister, S Iswaran, in a written response to queries in Parliament, on Monday said: “Singapore and Indonesia are working towards an arrangement to facilitate two-way quarantine-free travel for fully vaccinated travellers between Singapore and Batam and Bintan, as part of our plans to gradually reopen borders while managing public health risks.”

“We will share more details when ready,” he added.

Mr Iswaran, in his response, also released figures on the number of travellers between Singapore and Batam and Bintan. He said that in 2019, the average number of ferry passenger arrivals and departures was about 146,000 a week in total. Since Indonesia opened up quarantine-free travel bubbles for fully vaccinated tourist travellers from Singapore to Batam and Bintan from Jan 24, the number has remained at around 600 per week.

Indonesia was initially hit by a Covid-19 wave in early 2021. A more devastating wave, dominated by the deadly Delta variant of the coronavirus, in the middle of the year saw daily new cases surge to 56,757 at its peak on July 15. The second wave pushed hospitals and healthcare workers in Indonesia to the limit.

The highly transmissible but less severe Omicron variant led to a third wave recently, with the number of daily new cases hitting 55,209 on Saturday. But this now appears to be on a downward trend with 44,526 cases recorded on Sunday and 36,501 on Monday, according to government data.

Dr Windhu Purnomo, an epidemiologist with Airlangga University in East Java, said that cases in Jakarta, which made up a significant proportion of the national tally, had also passed their peak.

Far fewer people were also dying from Covid-19, he said. The number of new deaths daily during the Delta wave peaked at 2,069 sometime in July. But that number has been cut to about 110, Mr Budi said.