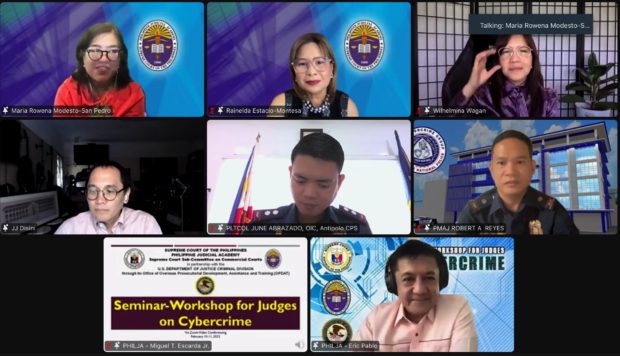 MANILA, Philippines – Thirty-eight executive judges across the country were trained against cybercrimes in a workshop organized by the United States Embassy in Manila.

Executive judges from Metro Manila and Regions 1 to 12 participated in the workshop and were briefed on cybercrime and how the Philippines’ Rules on Cybercrime Warrants (RCW) can be effectively executed, the embassy said in a statement on Tuesday.

The participating judges, who are overseeing the special commercial courts designated as cybercrime courts, evaluated and ruled on the RCW’s applicability in hypothetical cases as a culminating exercise during the training program.

The embassy partnered with U.S. Department of Justice Office of Overseas Prosecutorial Development, Assistance, and Training (DOJ OPDAT), the Philippine Supreme Court Sub-Committee on Commercial Courts, and the Philippine Judicial Academy (PHILJA) for the program, which was held from Feb. 10 to 11.

According to Associate Justice Maria Rowena Modesto-San Pedro of the Court of Tax Appeals, the COVID-19 pandemic prompted many Filipinos to resort to online transactions.

Because of this, she stressed the need for judges to be ready for a rise in the number of cybercrimes in the country.

“Not only do judges get to familiarize themselves with concepts like hash values, off-site search, forensic imaging, among others, but they also hone their skills in hearing applications for cybercrime warrants while ever cognizant of the right to privacy,” she added.

Donald Calvert, a resident legal adviser at the DOJ OPDAT, said the U.S. values the opportunity to work with PHILJA to improve the judiciary’s skills in the areas of cyber warrants and digital evidence.

“Despite the pandemic, this important series of workshops has continued online with the support of DOJ partners in the U.S. and the Supreme Court here in the Philippines,” said Calvert. Jericho Zafra, INQUIRER.net trainee

PH, US partner up for training of judges on new cybercrime court rules