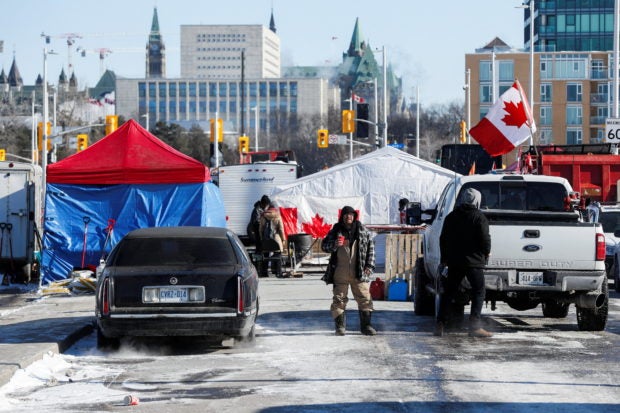 OTTAWA  – Canadian Prime Minister Justin Trudeau said on Monday he will activate rarely used emergency powers in an effort to end protests that have shut some border crossings and paralyzed parts of the capital.

“The blockades are harming our economy and endangering public safety,” Trudeau told a news conference. “We cannot and will not allow illegal and dangerous activities to continue.”

Frustration has grown with what critics see as a permissive approach by police to the demonstrations in the border city of Windsor, Ontario, and in Ottawa, the nation’s capital, where protests entered a third week.

“Despite their best efforts, it is now clear that there are serious challenges to law enforcement’s ability to effectively enforce the law,” Trudeau said.

Protesters blockaded the Ambassador Bridge, a vital trade route to Detroit, for six days before police cleared the protest on Sunday.

The “Freedom Convoy” protests, started by Canadian truckers opposing a COVID-19 vaccinate-or-quarantine mandate for cross-border drivers, have drawn people opposed to Trudeau’s policies on everything from pandemic restrictions to a carbon tax.

The 1988 Emergencies Act allows the federal government to override the provinces and authorize special temporary measures to ensure security during national emergencies. The law has only been used once before in peacetime, in 1970, by Trudeau’s father, former Prime Minister Pierre Trudeau.

Earlier on Monday, four provincial premiers — in Alberta, Quebec, Manitoba and Saskatchewan — said they opposed plans to invoke the act, saying it was unnecessary.

The Canadian Parliament would have to approve the use of the emergency measures within seven days, and it also has the power to revoke them.