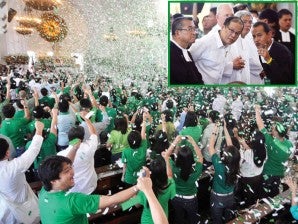 100 YEARS. Br. Bernie Oca (above) points out to President Aquino a feature of Thursday’s celebration of De La Salle University’s centennial on its Taft Avenue campus in Manila. From left, are Br. Narciso S. Erguiza, Br. Thomas Johnson and Br. Edmundo Fernandez. Behind is Br. Armin Luistro, education secretary and former DLSU president. At left, Lasallians celebrate following the enshrinement of St. John Baptist de la Salle, founder of the Christian Brothers, at the Chapel of the Most Blessed Sacrament. EDWIN BACASMAS

De La Salle University (DLSU), a Christian Brothers institution that began classes with 125 boys and endured the horrors of war to become one of the country’s top schools, marked its centennial on Thursday with its Manila campus turning “green” with festivities and President Benigno Aquino III hailing its leaders for their courage.

In a program ushering the yearlong celebration, Mr. Aquino thanked the Lasallian community for its political vigilance since the Marcos dictatorship up to the scandal-wracked years of the Arroyo administration.

“All others ran away in fear, but the De La Salle Brothers, they didn’t turn around, and they didn’t stop in expressing the true sentiments of the country,” the President said in a speech.

He recalled how the Lasallian community helped safeguard the vote in the latter years of the Marcos regime starting in 1984, when it lent its St. Benilde Gym to the poll watchdog National Citizen’s Movement for Free Elections (Namfrel).

“Thank you for (making) sure that the true voice of the people would come out in the ballot and not the fabricated vote-padding and shaving by the dictatorship,” he said.

He also recalled how the gym, located on the De La Salle Green Hills campus in Mandaluyong City, provided the venue for the wake of his mother, the late President and democracy icon Corazon Aquino, who died in 2009.

“I thank you for your prayers and sympathies when our family was mourning along with the whole country,” he said. “In both the bright and dreary episodes of our lives, you didn’t leave our family on our own. For this, accept our heartfelt gratitude.”

The President also lauded La Salle for standing up to criticism when it joined calls for the resignation of then President Gloria Macapagal-Arroyo in the wake of the “Hello Garci” election fraud scandal in 2005.

Fight for the right

“Even if accusations were hurled at you from left and right, even if some groups (including) other religious orders questioned your position, you stood pat,” Mr. Aquino said.

“You knew what you were fighting for was right and that conspiring and taking undue advantage in manipulating the results of the elections was wrong from any perspective it is viewed, even if the President herself was the one being accused.”

Mr. Aquino also recounted how the La Salle Brothers provided security for Rodolfo Lozada Jr. after the latter blew the whistle on the anomalous contract between the Arroyo administration and the Chinese firm ZTE for the National Broadband Network project.

“When Lozada asked for help (because of security threats), windows and doors were closed. No one but the De La Salle Brothers had the courage to open their doors and kept Lozada and his family. When the (future of the) country is at stake, Lasallians aren’t afraid to take a risk,” he said.

On a lighter note, Aquino joked that, being an alumnus of DLSU’s chief rival, Ateneo de Manila University, he “couldn’t help but get a bit anxious… like every other Blue Eagle who would wander in the territory of the Green Archers.”

“But despite this, I didn’t have second thoughts in accepting your invitation because even if I graduated from a certain university on Katipunan (Avenue), even if the blood running through my veins is blue, and even if my convoy would have difficulty finding a parking space, I couldn’t pass on the chance to be with the whole Lasallian community and celebrate with you and shout ‘Animo La Salle’ on your centennial,” he added.

“(For) when our future and honor as Filipinos are at stake, it is no longer important if your perspective is colored green or blue or red or yellow. What’s important is your unity for the sake of the country,” Mr. Aquino said.

He then ticked off the names of prominent Lasallians in his Cabinet, starting with former DLSU president and now Education Secretary Br. Armin Luistro.

President Aquino attributed the long tradition of high quality education in DLSU to the university’s “desire to serve your fellowmen and contribute to the country’s welfare.”

“That’s why today, many of our companions in running the country are products of La Salle,” he stressed.

“We continue the legacy of academic excellence, research scholarship and applied learning via social responsibility—the main tenets that will make us a leading university in Asia in the not-so-distant future,” said Br. Narciso Erguiza Jr., DLSU president and chancellor.

“All these are done in the service of God and country,” Erguiza said. “We celebrate the many lives touched and because these lives have served as exemplars of quality Lasallian education. Truly, we have every reason to celebrate.”

In a Mass held at DLSU’s Most Blessed Sacrament Chapel, Imus Bishop Luis Antonio Tagle said all members of the Lasallian community “are called to greatness.”

“We are gathered as a community of faith. Today would be the start of 100 years of contribution of Catholic education to the country,” Tagle added, addressing a congregation who mostly came in green and white, La Salle’s varsity colors.

The DLSU Chorale, together with the Manila Symphony Orchestra under the baton of Jude Edgard Balsamo, led in the singing of “One La Salle Prayer” as the start of the centennial celebration which was formally declared under a rain of green and white confetti.

Speaking to reporters, Manila Archbishop Gaudencio Cardinal Rosales, who also officiated in the Mass, said he was there “to salute the Lasallian brothers for they are doing well” and urged them to “lend more of themselves.”

Since Wednesday, the chapel has been opened for the public viewing of a relic of St. John Baptist de la Salle, patron saint of Christian teachers and founder of the Institute of the Brothers of the Christian Schools.

The 292-year-old relic was a gift from the Christian Brothers’ Institute in Rome to its Philippine district on the occasion of DLSU’s centennial.

From the university’s main campus on Taft Avenue, the relic will later tour other La Salle schools across the country.

This Sunday, June 19, the university will stage a religious concert titled “Fire in the Soul” in tribute to the 17 La Salle Brothers massacred by Japanese soldiers along with several other civilians who took refuge in the DLSU chapel in World War II. With a report from Inquirer Research