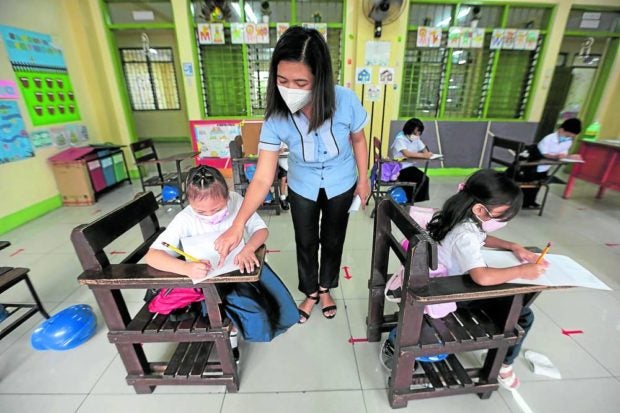 IN-PERSON CLASSES: A teacher points at something to a student at Pedro Cruz Elementary School in San Juan City as it reopened on Feb. 10, 2022 (Photo by GRIG C. MONTEGRANDE / Philippine Daily Inquirer)

MANILA, Philippines — Eight senatorial bets unveiled their plans and platforms for the education sector during a forum organized by the Alliance of Concerned Teachers on Friday.

As former chair of the Senate committee on finance, Legarda assured that there was enough budget to fund the overtime pay of teachers.

“Let’s not believe when they say that the budget is not enough [because] we can do it. The important part is that we put it in the Department of Education (DepEd),” she said.

Meanwhile, former Bayan Muna Rep. Neri Colmenares said that to provide access to quality education, there must be more colleges and universities. Proper salaries and benefits should also be provided to teachers.

He underscored that the economic status of the people must be uplifted because “no matter how good the quality of education is, there is a tendency for students to drop out because they need to work.”

On the matter of improving the Government Service Insurance System (GSIS), Sen. Leila de Lima, who was represented by lawyer Abel Maglangque, said that there should be congressional oversight.

“The teachers are overworked so we should hire more teaching assistants who can help in the administrative and nonteaching work given to our educators,” Maglangque said.

Labor leader Sonny Matula said he would advance the creation of tertiary educational institutions and increase the budget for teachers and nonteaching staff.

To entice talented professionals, they must be given education scholarships and benefits, Matula said.

“There should also be a freedom of association … so that teaching and nonteaching staff would have a voice in policymaking,” he added.

Under her “Healthy Buhay at Hanapbuhay” campaign, reelectionist Sen. Risa Hontiveros said she would champion the inclusion of human rights and gender subjects in the curriculum and call for a “proactive” leadership from the DepEd and the Commission on Higher Education.

Labor leader Elmer Labog is eyeing a “progressive overhaul” of the education system as he vowed to address the issue of contractualization and security of tenure on teachers and instructors in the tertiary level and private institutions.

On academic freedom, Labog said the students and teachers in universities nationwide must be given the freedom to think and exchange ideas freely not just inside the campus but through integration with communities.

Former Ifugao Rep. Teddy Baguilat underscored the importance of recognizing the schools of indigenous peoples and stopping their closure.

Sen. Sherwin Gatchalian, meanwhile, pushed for the implementation of limited in-person classes and called for the prioritization of teachers’ health.