Session Road’s giant mandalas a head-turner, but they cost a fortune 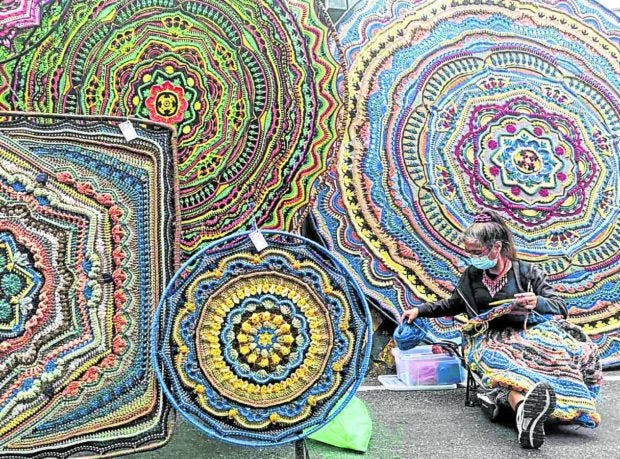 ART IN DIFFICULT TIMES: Huge mandalas like these designs by crochet artist Adelaida Guia have been on display along downtown Session Road on Sundays when the thoroughfare is turned into a pedestrian mall. (Photo by EV ESPIRITU / Inquirer Northern Luzon)

BAGUIO CITY, Benguet, Philippines — Giant mandalas have been turning heads along downtown Session Road, which artists would convert into a pedestrian mall on Sundays.

Tourists would walk closer to scrutinize the elaborate patterns of those works. A mandala, which means “circle” in Sanskrit, is a geometric design associated with Hinduism or Buddhism made for the purpose of meditation.

Sometimes their creators, like needlework artist Adelaida Guia, would be offered to give lessons instead—which she quickly turned down.

“I don’t teach. You can do what I did — learn from YouTube,” she advised a Baguio resident.

Guia, who is also a customer service representative at a call center, said she found her passion for mandalas when the coronavirus pandemic broke out.

A mother of five married to a Cordilleran, she and her family moved to Baguio in 2016, four years before COVID-19.

Like many residents, the Guia family had to develop coping mechanisms to deal with lockdowns, the ever-changing quarantine rules, and the constant fear and uncertainty during those first two years of the pandemic.

Guia said making crochets had always been a hobby of hers since childhood.

Thus she realized soon enough, when the pandemic began, that crocheting mandalas “made me happy.”

The intricacies of the mandala were “too difficult to make at first,” said Guia, who studied the techniques behind the art form on the internet.

At her small display area on Session Road, she put a signboard that served to explain that her pieces were inspired by the “Mandala Madness” of American crochet artist Helen Shrimpton.

Guia remembers that putting together a “heartbeat” mandala design was her toughest challenge.

She said it would take her a little more than two weeks to finish a smaller mandala, one of which she sold recently for P15,000.

Guia grew up in Sta. Mesa, Manila, raised by a mother who also loved crochet work, she said.

“I used to produce crochet products for classmates in home economics,” she recalled, adding that she would use the money she earned to buy gifts for friends.

She enrolled in accounting at the Polytechnic University of the Philippines but did not complete her course.

Later, as she raised her family, her husband and children would help in the family crafts business she put up called Abikaka, which is an anagram for “kakaiba (unusual).”

Guia is pleased that her oldest daughter, 22-year-old Danielli, has also caught the crochet bug.

She said Danielli learned the craft on her own, without her mother having to teach her.

Her other children have pursued other craft skills, and products they have created like rag dolls and earrings are now also up for sale at Guia’s stall.