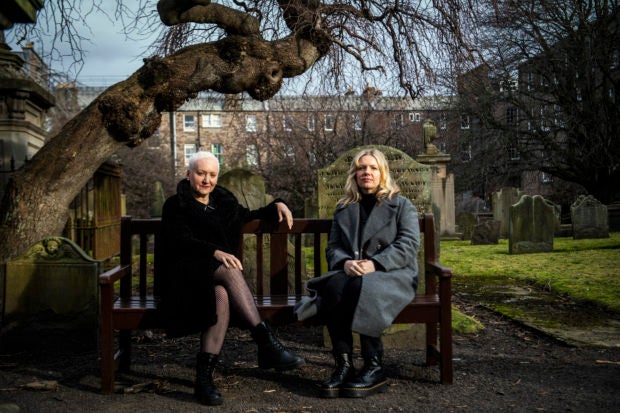 Founder of the association “Witches of Scotland” Claire Mitchell and member Zoe Venditozzi pose for pictures in the Howff Cemetery in Dundee, Scotland, on January 30, 2022. AFP

DUNDEE — Claire Mitchell and Zoe Venditozzi are fighting for pardons for all those executed for witchcraft in Scotland, the vast majority of whom were women, and for a memorial to those forgotten by history.

“Between the 16th and 18th century in Scotland, approximately 4,000 people were accused of witchcraft,” explained Mitchell, a lawyer who founded the campaign group Witches of Scotland.

In total, more than 2,500 people were executed for witchcraft in Scotland, four-fifths of them women. They were mostly strangled and then burned, after making confessions that were often extracted under torture.

“People would take turns interviewing them, keep them awake for days and days and days, and ask them about witchcraft,” Mitchell told AFP at a graveyard in the city of Dundee.

“And those confessions were used by the courts in Scotland… to prosecute these women for witchcraft.”

They are recognized in the windblown 16th-century cemetery by a small column nicknamed the “Witches’ Stone”.

Passers-by often leave flower petals and coins as a tribute to those executed who include Grissel Jaffray, strangled and burnt in 1669.

In a city centre street, a mosaic depicting a cone of flames commemorates Jaffray, the woman known as “the last witch of Dundee”.

Mitchell founded Witches of Scotland on March 8, 2020 — International Women’s Rights Day — after discovering the harrowing consequences of the Witchcraft Act.

This 1563 law approved capital punishment for those guilty of witchcraft and was in force until 1736.

Witch hunts were enthusiastically promoted by Scotland’s King James VI, who became also king James I of England in 1603.

Mitchell’s association is calling for three things: a pardon for all those convicted of witchcraft, an official apology from the authorities, and a national monument to remember the victims.

Co-campaigner Zoe Venditozzi, 46, said that she knew “nothing” about the witch hunts until recently despite growing up in Fife, a hotbed of executions.

She discovered that “anyone could be accused” and that it was “generally ordinary people, often poor people” who could not stand up for themselves or were seen as being odd in some way.

“In those days, people believed really, really strongly in the devil,” she said, and that women were seen as “vessels” that the devil could manipulate.

Natalie Don, an MP with the Scottish National Party, the pro-independence party that holds power in Edinburgh, intends to introduce a bill in the Scottish Parliament to obtain a pardon for all those convicted.

“In several countries across the world people are still accused and punished for practicing witchcraft,” she told AFP.

“Scotland should lead the way in acknowledging the horrors of our past and ensure that these people do not go down in history as criminals.”

Scotland was particularly prone to witch hunts, according to Julian Goodare, emeritus professor of history at Edinburgh University, who has overseen the creation of a database to record them.

With 2,500 people executed in a population of two million, the rate was around five times higher than the average in Europe, he said at Edinburgh Castle, the site of many public executions.

It was driven in part by Scotland’s drift away from the Catholic Church during the Protestant Reformation, which saw a rampant “fear of ungodliness”, and accelerated after an alleged plot to bewitch King James in the 1590s.

Authorities viewed witch hunts “as part of a cosmic battle between God and the devil,” Goodare said.

He also favors a monument to this history: “There’s nothing we can do to change the past, but we can learn from it.”

I met a witch on Facebook—and she also does TikTok

Two girls and a small bakery inspired by witches and cauldrons