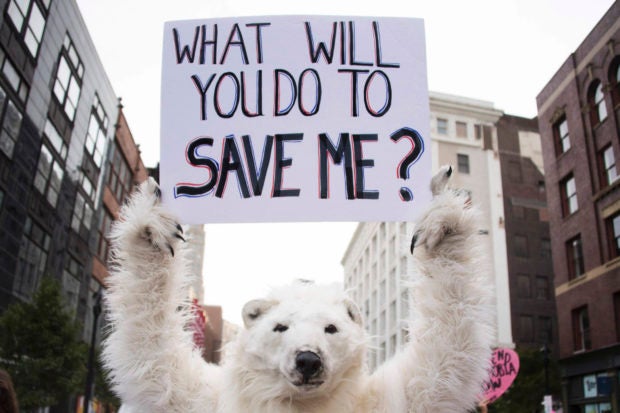 CAMPAIGNING FOR CLIMATE-SAFE PLANET  – Dressed as a polar bear, a man joins demonstrators against climate change in Cleveland, Ohio, in July 2016. The 197-nation Paris climate treaty, signed in 2015, vows to halt global warming at well under 2 degrees Celsius compared to mid-19th century levels, and pursue efforts to cap the rise at 1.5 degrees. (AFP)

PARIS, France – Nearly 200 nations kick off a virtual meeting Monday to finalise what promises to be a harrowing scientific overview of accelerating climate impacts that will highlight the urgent need to cut emissions — and prepare for the challenges ahead.

The world is already feeling the effects of global warming, driven largely by the burning of fossil fuels, with last year seeing a cascade of deadly floods, heatwaves and wildfires across four continents.

The upcoming update from the Intergovernmental Panel on Climate Change (IPCC) is set to outline in stark detail what the best available science tells us are the impacts of the changing climate — past, present and future.

During a two-week gathering, diplomats and scientists will vet, line-by-line, an all-important Summary for Policymakers, boiling down an underlying report thousands of pages long.

An early draft of the IPCC review seen by AFP in 2021 makes clear the extent to which devastating climate impacts are a here-and-now reality.

In some cases this means that adapting to intolerably hot days, flash flooding and storm surges has become a matter of life and death.

“Even if we find solutions for reducing carbon emissions, we will still need solutions to help us adapt,” said Alexandre Magnan, a researcher at the Institute for Sustainable Development and International Relations in Paris and a co-author of the report, without commenting on the report’s findings.

Species extinction, ecosystem collapse, crippling health impacts from disease and heat, water shortages — all will accelerate in the coming decades even if the carbon emissions that drive global warming are drawn down, the report is likely to find.

“This is a real moment of reckoning,” said Rachel Cleetus, Climate and energy policy director at the Union of Concerned Scientists.

“This not just more scientific projections about the future,” she told AFP. “This is about extreme events and slow-onset disasters that people are experience right now.”

IPCC assessments are divided into three sections, each with its own volunteer “working group” of hundreds of scientists.

In August 2021, the first instalment on physical science found that global heating is virtually certain to pass 1.5 degrees Celsius (2.7 degrees Fahrenheit), probably within a decade.

That is the heating limit envisioned in the Paris Agreement, beyond which impacts become more severe.

This second report on impacts and adaptation, due for release after the two-week meeting, is likely to underscore that vulnerability to extreme weather events — even when they are made worse by global warming — can be reduced by better planning.

This is not only true in the developing world, noted Imperial College professor Friederike Otto, pointing to massive flooding in Germany last year that killed scores and caused billions in damage.

“Even without global warming there would have been a huge rainfall event in a densely populated geography where the rivers flood very easily,” said Otto, a pioneer in the science of quantifying the extent to which climate change makes extreme weather events more likely or intense.

The latest report will also likely zero in on how climate change is widening already yawning gaps in inequality, both between regions and within nations.

This means that the people least responsible for climate change are the ones suffering the most from its impacts.

Not only is this unjust, experts and advocates say, it is a barrier to tackling the problem.

“I do not think there are pathways to sustainable development that do not substantively address equity issues,” said Clark University professor Edward Clark, a lead author of one of the reports chapters.

Earth’s surface has warmed 1.1 degrees Celsius since the 19th century.

The 2015 Paris deal calls for capping global warming at “well below” 2C, and ideally the more ambitious limit of 1.5C.

This report is sure to reinforce that goal.”There are limits — for ecosystems and human systems — to adaptation,” said Cleetus. “We cannot adjust to runaway climate change.”

Indeed, the report will probably emphaise more than ever before dangerous “tipping points”, invisible temperature trip wires in the climate system for irreversible and potentially catastrophic change.

Some of them — such as the melting of permafrost housing twice as much carbon as in the atmosphere — could fuel global warming all on their own.

At the same time, scientists are only just beginning to get a handle on so-called cascading and compound impacts — how Greenland’s melting ice sheet, for example, affects ocean currents across the globe.

“There is a finite set of choices we can make that would move us productively into the future,” said Carr. “Every day we wait and delay, some of those choices get harder or go away.”