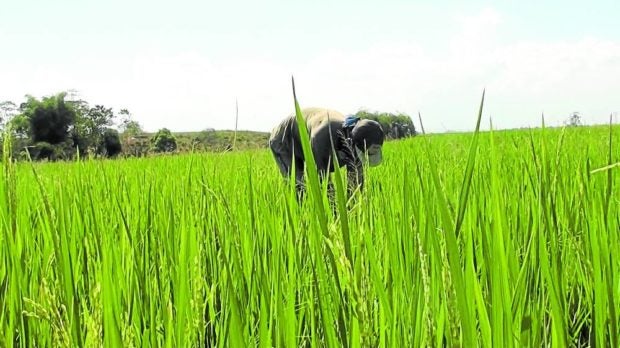 CROP WATCH Farmer Miguel Tulinao inspects the palay grown in his field in Naguilian Norte, City of Ilagan, Isabela province, on Thursday to protect them from the rice blast disease that has been damaging other farms in Cagayan Valley. —VILLAMOR VISAYA JR.

Entomologist Minda Flor Aquino, head of the Department of Agriculture (DA) Regional Crop Protection Center in the region, said the blast disease had already wreaked havoc on rice fields in 22 localities in Isabela, Quirino and Cagayan.

Rice blasts appear due to frequent dew formation and prolonged periods of rain showers in areas with low soil moisture and high humidity, Aquino told the Inquirer in an interview.

Except for the roots, rice blast infects most parts of the crop from seedlings to maturity. It causes elongated white to gray-green lesions or spots with dark green or brownish borders that measure 1 to 1.5 centimeters long and 0.3 to 0.5 cm wide.

Widespread rice blast infection could lead to massive destruction of the crops’ leaf area for grain fill, resulting in death of the leaves and poor harvest.

Aquino said the DA had already started providing farmers with technical assistance to help them manage or control the spread of the plant disease, which can damage 50 to 80 percent of an entire rice field.

DA officials have yet to estimate the cost of damage caused by the fungal disease to affected rice farms.

Aquino has urged local government officials to help reduce the incidence of rice blasts in their areas by distributing fungicides to farmers.

Farmer Miguel Tulinao of Barangay Naguilian Norte in the City of Ilagan said the gradual spread of rice blast disease was “alarming” as it threatens to also severely damage their crops ahead of the scheduled harvest in May.

“I only sprayed the fungicide once. I hope the disease will not quickly spread so my unaffected rice plants will be spared,” Tulinao said in Ilocano.

Aquino asked farmers to maintain a 4-foot (1.2 meters) water level in their rice farms to reduce the spread of rice blasts since the disease becomes severe in fields where the water in paddies falls below the recommended levels.

“Spraying fungicide is needed during the fruiting or reproductive stage to protect the panicle (top part of the plant),” she said.

Read Next
Valentine’s Day stamps in the time of pandemic launched
EDITORS' PICK
‘FPJ’s Ang Probinsyano’ officially ends after nearly 7 years
Powered by style, innovation and passion
Red-tagged green activist recalls imprisonment
Authors unbowed after gov’t ‘purge’ of books
A laptop that maximizes your WiFi so you can maximize your productivity
House energy committee chair Arroyo bats for cheap electricity
MOST READ
Arjo Atayde reveals proposal to Maine Mendoza was ‘more than a year’ in the making
Man, girlfriend found dead in Leyte river
‘FPJ’s Ang Probinsyano’ officially ends after nearly 7 years
Angelica Panganiban, Camille Prats recall ‘trauma’ of being called out for weight gain in ‘G-mik’
Don't miss out on the latest news and information.