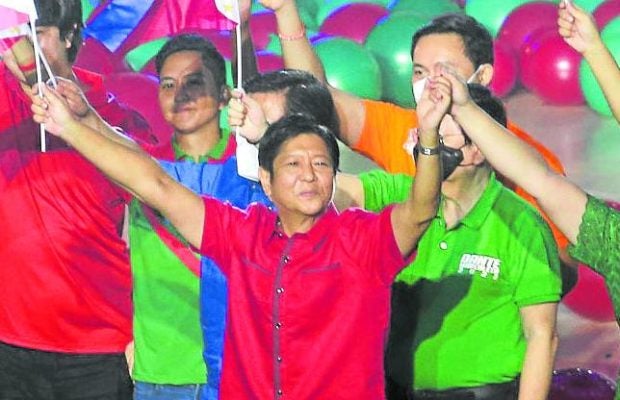 The First Division of the Commission on Elections (Comelec) on Thursday dismissed three petitions to disqualify Ferdinand Marcos Jr. from running for president in the May 9 polls saying he was “qualified to be elected.”

“We recognize that the resolution of the instant case is of paramount importance considering that the 2022 national and local elections is fast approaching,” the ruling stated.

“However, the deprivation of one’s right to be voted for in any election should not be exercised whimsically and capriciously, lest we will be preventing qualified candidates from pursuing a position in public office,” the First Division said in its 45-page decision.

The two remaining members of the division—Commissioners Marlon Casquejo and Aimee Ferolino—voted in favor of Marcos.

The third member who was its presiding commissioner, Rowena Guanzon, retired on Feb. 2 along with Comelec Chair Sheriff Abas and Commissioner Antonio Kho Jr.

That left only four members of the poll body to comprise the en banc, or the Commission as a whole, to which appeals of its rulings could be made.

In all, there were five petitions against Marcos and they were based on the same ground: that he had been barred for life from holding public office because he was convicted of violating the 1977 National Internal Revenue Code (NIRC) when he did not pay taxes and file income tax returns while serving as vice governor and later as governor of Ilocos Norte from 1982 to 1985.

The First Division ruling said the 1997 Court of Appeals (CA) decision amended the decision of the Quezon City Regional Trial Court (RTC) by convicting Marcos only for nonfiling of tax returns and did not explicitly state that Marcos was penalized with perpetual disqualification from public office.

“A penalty that would deprive a citizen of his political right to be voted for in an election should be clearly, unequivocally and expressly stated in the decision,” the division said.

“The withholding of such right cannot be made dependent on a mere proposition that the penalty of perpetual disqualification for violation of Section 45 of the 1977 NIRC is deemed written in the decision,” it added.

It was essentially the same ground on which the Second Division dismissed a petition to cancel Marcos’ certificate of candidacy (COC) on Jan. 17. The petitioners’ appeal to the en banc is still pending.

The two other Commissioners, Socorro Inting and Rey Bulay, are the members of the Second Division which has not yet ruled on the only disqualification petition left.

The remaining petition for disqualification is pending in the Second Division.

The long-awaited decision had caused a rift between Guanzon and Ferolino, who was the assigned “ponente,” or the poll body member who would write the decision.

Guanzon said Ferolino deliberately sat on the cases so that her vote to disqualify Marcos would not be counted in the final decision.

In its ruling, the First Division warned that upholding the theory of the petitioners would establish a “dangerous precedence for future litigations of petitions for disqualification grounded on violations of the tax code.”

It also said the appellate court’s ruling removed the penalty of imprisonment and imposed only a fine for failure to file income tax returns.

“Whether the law provides for the imposition of either fine or imprisonment is further bolstered by the fact that the CA decision never meted the penalty of imprisonment against (Marcos),” it said.

It also ruled that Marcos was not convicted of a crime involving moral turpitude, which could have been a ground for disqualification, citing Supreme Court rulings.

The First Division said the Supreme Court considered failure to file tax returns as a “mere omission on the part of the taxpayer, thereby removing it from the ambit of acts that constitute fraud.”

“Whether or not he satisfied the payment of fines and penalties with the RTC of Quezon City is immaterial, as his sentence did fall within the purview of Section 12 of the Omnibus Election Code.”

The section states the grounds to disqualify a candidate: if the candidate has been declared insane or incompetent, convicted of an offense with a penalty of more than 18 months’ imprisonment, and convicted of a crime involving moral turpitude.

Marcos told reporters covering his campaign sortie in Valenzuela City that the decision was a “good result for us.”

“Now maybe we can carry on with the campaign without all of these distractions that were put in the way and allow our people to make their own decisions and to vote for who the candidate is that they want,” Marcos said.

Victor Rodriguez, his spokesperson, commended the members of the First Division for “upholding the law by dismissing cases that we have long described as nuisance petitions.”

Rodriguez said the petitioners “were found guilty of lying and of deliberately misleading the Comelec by intentionally quoting the wrong provisions of the law and squeezed them into their faulty narratives.”

He called on them to stop “spreading lies” about Marcos, but turned around and added that their side was extending their “hands of unity” to their opponents to shape “a better and united future for our people.”

Barry Gutierrez, a spokesperson for the main opposition presidential candidate, Vice President Leni Robredo, said she was determined to win at the polls from the beginning and the disqualification cases were “never a consideration.”

“From the time she announced her candidacy, she always intended to achieve victory in the elections,” he said. “And with Tuesday’s explosive start to her campaign, it’s clear that she’s on track to do just that.”

Robredo defeated Marcos for vice president in the 2016 elections.

Ernest Ramel, chair of Aksyon Demokratiko whose standard-bearer is Manila Mayor Francisco “Isko Moreno” Domagoso, said the dismissal of the three petitions may be good news for the deposed dictator’s son and namesake.

“However, the people continue to await what his real plans are for the country and for the Filipinos aside from the motherhood statements he delivered in his 15-minute speech during his proclamation rally,” he said. —WITH REPORTS FROM LEILA B. SALAVERRIA, JEANNETTE I. ANDRADE AND KRIXIA SUBINGSUBING