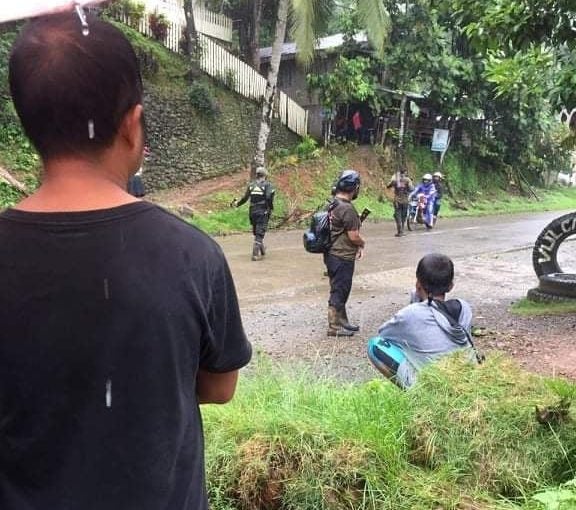 Some members of the NPA Guerilla Force 30 who set up a checkpoint along the national highway in Cortes town in Surigao del Sur. CONTRIBUTED PHOTO BY Netz TV Caraga.

SAN FRANCISCO, AGUSAN DEL SUR — Some 100 New People’s Army rebels briefly set up a checkpoint along the national highway of Cortes town in Surigao del Sur around 8 a.m. Thursday, disrupting travel by motorists, even as they reportedly ransacked the sari-sari store and house of a former Army officer nearby.

The Surigao del Sur Provincial Police Office confirmed the incident but did not yet disclose as of press time what had been taken by the rebels.

Lt. Jimel Acuesta, chief of police in Cortes town, said at least four policemen initially responded to the incident but soon withdrew after seeing that they were outnumbered. He said the armed rebels, who also went to the store of of former 2nd Lt. Joven Rivera, stayed about 30 minutes in the place.

Witnesses said they saw the rebels talking to the former soldier in his house but it was not clear if they confiscated his firearms. Rivera had long resigned from his unit.

Neighbors also claimed to have seen the rebels carting away some foodstuffs from the store. Those at the checkpoint did not harm but only talked to passersby. The checkpoint, however, disrupted travel by motorists and commuters.

“Many of the workers who were on their way to work did not push through with their travel out of fear. This is a violation of the International Humanitarian Law,” the Surigao del Sur PPO posted on its social media page.

Patrolman Melvin Castro, who was assigned to respond to the calls of the provincial police, said the rebels were no longer around when the Police provincial mobile force and troops from 36th Infantry Battalion arrived at the scene. He said the clearing operations ended at 9 a.m. on Thursday.

The NPA attack came barely four months after the death of Jorge Madlos, popularly known in the area as Ka Oris, a senior NPA leader killed in Bukidnon October 29 last year and whose death the military claimed had greatly weakened the communist forces in the region.

To block another similar attack by NPA rebels, police have set up a checkpoint along the national highway in Barangay Buenavista in Tandag City to block a possible attack by the NPA rebels.