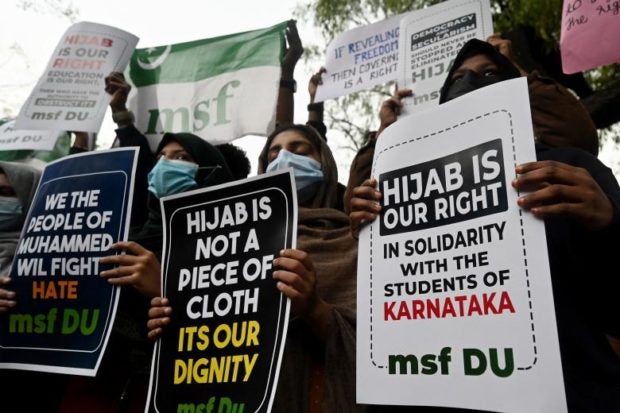 Activists from a Muslim student federation protest against the hijab ban, in New Delhi on Feb 8, 2022. PHOTO: AFP

BANGALORE – The government of the southern Indian state of Karnataka has ordered high schools and colleges to close for three days till Friday (Feb 11) following protests and violence over an apparent state ban on the wearing of the hijab, or Islamic headscarf, in public educational institutions.

Rallies opposing and supporting the ban were held in at least five districts across the state on Tuesday. Police used tear gas and wielded batons while charging at protesters in Shivamogga, Bagalkot, Davangere and Udupi districts. About 40 students and some policemen were injured.

In a video from Shivamogga, some students wearing saffron shawls – associated with Hinduism – hoist a saffron flag on the premises of a government college.

Another widely circulated video shows men with saffron scarves heckling a hijab-clad female student at a government college in Mandya.

In Udupi, a Hindu student wearing a saffron turban, who identified herself as Ms Bhargavi, said “friendships have been broken over the hijab row in our college”. She refused to interact with her Muslim classmates till they took their headscarves off because “that is the new policy”.

The controversy began last month when educational institutions opened after an almost two-year-long Covid-19 lockdown. A public pre-university college in the coastal district of Udupi denied entry to six Muslim female students for wearing headscarves with their uniforms. The students protested outside the college gates, drawing media attention.

College authorities say their official uniform policy never allowed for the hijab to be worn, but the students insisted that the policy did not mention any restrictions on headscarves.

Udupi legislator K. Raghupathi Bhat, who chairs the college development committee that issued the hijab ban, told Times of India that he “never anticipated it (the protest) would reach this level”.

In certain institutions that allow the wearing of the hijab, some Hindu students wore saffron shawls and turbans to class as a form of protest.

Things came to a head last Saturday (Feb 5) when the Karnataka government issued a directive that said students have to follow the dress codes set by the state government, private school or college management. The order cited Indian court judgments to argue that a ban on hijab on campus did not run afoul of constitutional rights. 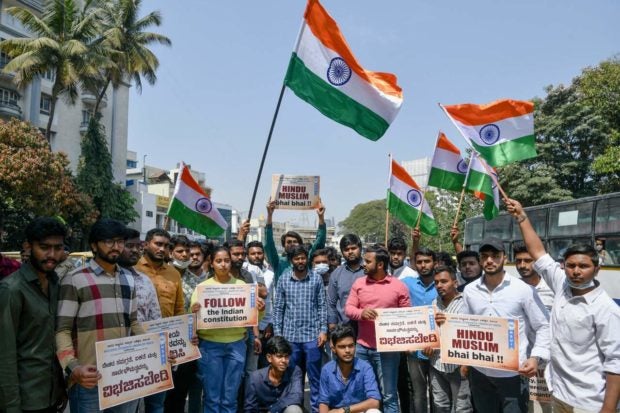 A protest in Bangalore, India, against an apparent state ban in Karnataka on the wearing of the hijab in public educational institutions, on Feb 9, 2022. PHOTO: AFP 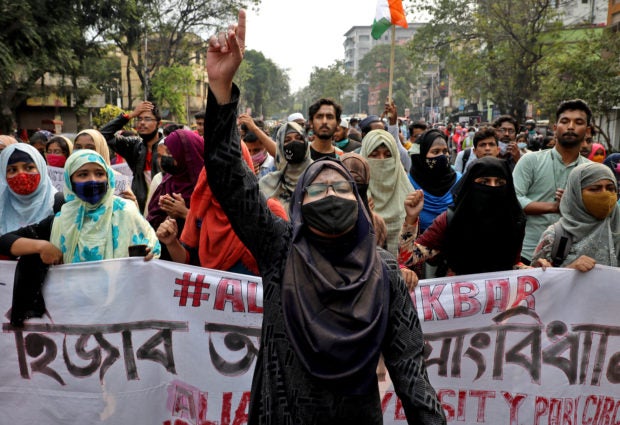 A protest in Kolkata, India, against an apparent state ban in Karnataka on the wearing of the hijab in public educational institutions, on Feb 9, 2022. PHOTO: REUTERS

On Tuesday, the Karnataka High Court started hearing petitions filed by four Muslim female students in Udupi that challenge the ban. The court has referred the matter to a larger Bench.

Nobel Peace Prize winner Malala Yousafzai, a global campaigner for women’s education, posted on Twitter on Tuesday: “Refusing to let girls go to school in their hijabs is horrifying. Objectification of women persists – for wearing less or more.”

The hijab is commonly worn across India, and there are no restrictions on its use in public spaces.

“College is forcing us to choose between studies and the hijab”.

Refusing to let girls go to school in their hijabs is horrifying. Objectification of women persists — for wearing less or more. Indian leaders must stop the marginalisation of Muslim women. https://t.co/UGfuLWAR8I

Coastal Karnataka, where the row started, has witnessed several religiously charged incidents in recent years. The state, where about 13 per cent of the population is Muslim, is governed by Prime Minister Narendra Modi’s Hindu nationalist Bharatiya Janata Party.

Observers have pointed to the growing involvement of political organisations in the protests, including the Rashtriya Swayamsevak Sangh and the Social Democratic Party of India.

Why do Muslim women wear a hijab?