Ka Leody’s camp: We will fight to the last drop of our blood | Inquirer News
Close
menu
search

Ka Leody’s camp: We will fight to the last drop of our blood 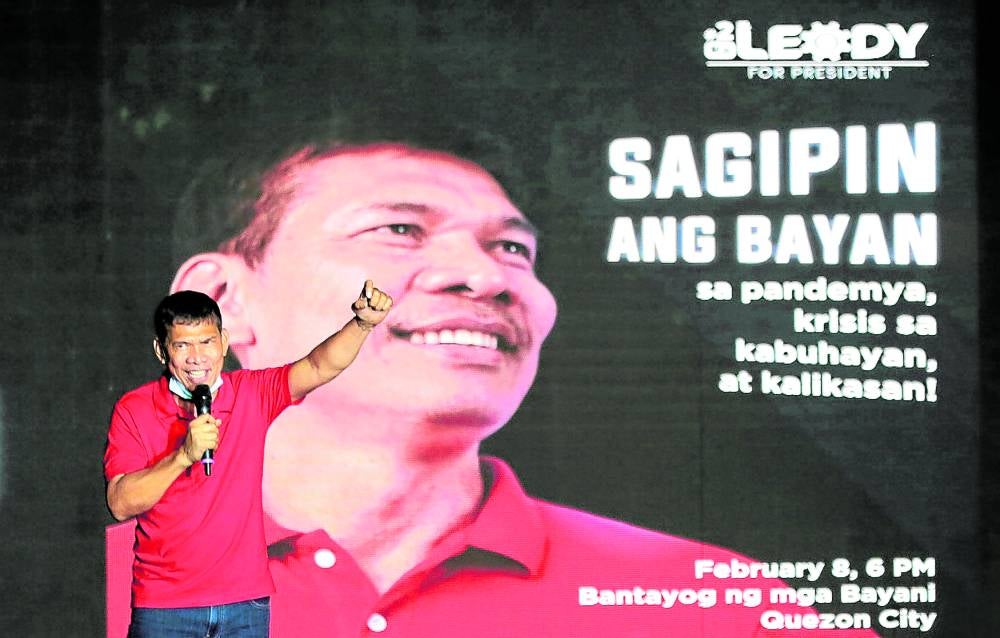 (FILE PHOTO) Presidential aspirant Leody de Guzman addresses supporters at his proclamation rally on Tuesday night at Bantayog ng mga Bayani in Quezon City, which pushed through despite the lack of a permit. —GRIG C. MONTEGRANDE

MANILA, Philippines — “We will fight to the last drop of our blood.”

The camp of labor leader and presidential contender Leody De Guzman made this assurance on Thursday as it vowed to pursue the candidacy of the underdog candidate in the May elections.

“We will fight to win, that’s what we are saying, and sa (in the) proclamation rally, hindi tayo titigil hanggang hindi tayo nagwawagi (we will not stop until we win),” De Guzman’s campaign manager Sonny Melencio said in an interview with ABS-CBN News Channel’s Headstart when asked if they think they can win in the polls.

“‘Yun ang aming tema (That is our theme), meaning we have the political will. Whatever happens, there is a movement we are going to build and we will fight to the last drop of our blood,” Melencio added.

For Melencio, “it’s late in the game” if De Guzman will just back off and end up endorsing Vice President Leni Robredo or other presidential candidates.

He also noted that the goal of their camp is not just about winning the elections but also changing the brand of politics in the country.

(The goal is to build a movement, a strong movement. It’s like stacking up small stones that will eventually become huge.)

“At alam naman namin na ang fight na ito is not only sa election, kasi the election is not our game. It’s a game of trapos, the old politicos, and laging the cards are stacked up against us,” Melencio said.

(And we know that our fight is not just for the election, because the election is not our game. It’s a game of traditional politicians, and the cards are stacked up against us.)

(But we do understand that whatever we can do will be a big help to change the brand of politics here from elite politics to politics for the masses.)