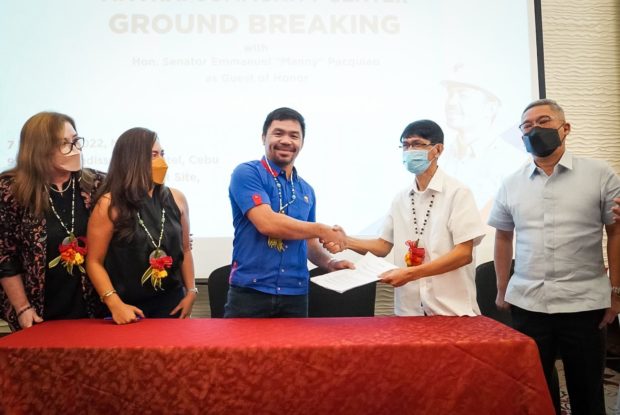 SPRING RAIN GLOBAL (SRG) named Sen. Manny Pacquiao 0 as its global “ Ambassador for the Homeless and Vulnerable” for championing the cause of the homeless.

MANILA, Philippines — Presidential aspirant Sen. Manny Pacquiao was formally named as the “Ambassador for the Homeless and Vulnerable” by international philanthropic organization Spring Rain Global (SRG), as he led the groundbreaking of a community center of a housing development project at the reclamation area in Brgy. Subangdako, Mandaue City, Cebu.

Spring Rain Global, known globally as one of the leading international organizations that raises and facilitates funding for various humanitarian projects especially in third world countries, has been working with the country’s Vincentian Missionaries, the Malibu Matimco Village Home Owners Association Inc., the Chamber of Real Estate and Builders Association, and the Mandaue City government for the construction of 3,000 housing units at the reclamation area in Sitio Malibu and Matimco in Mandaue.

SRG named Pacquiao as its global “Ambassador for the Homeless and Vulnerable” for championing the cause of the homeless. Apart from leading the turnover rites, Pacquiao also led the groundbreaking of the community center which he donated.

Also during his visit to Cebu, Pacquiao also turned over 10 generator sets donated by Veloce Esports and Team Pacquiao GG to 10 communities in Cebu province which still has no electricity due to the devastation caused by Super Typhoon Odette.

According to Pacquiao, although these private sector partnerships that build shelters for poor Filipinos are helping bridge the housing gap, these projects are barely enough to make a dent in addressing the country’s massive housing shortage.

Pacquiao said this is the reason why housing is one of the priority programs under his “Health of the Nation” policy platform. Health is an acronym for Housing, Education, Aid, Livelihood, Transportation and Utilities and Health.

Pacquiao said that he realized that it is impossible to address the country’s housing problem without the full and direct support of the government after building five housing subdivisions called Pacman Villages in General Santos City and the province of Sarangani.

Pacquiao said his experience where he was forced to sleep on the streets and his family had to live in makeshift shanties had prompted his desire to make housing one of the priority programs of his administration. Pacquiao said that having a decent home does not only provide shelter, warmth, and comfort but also gives people a sense of dignity and the motivation to improve their way of life

Pacquiao said he plans to build at least 10 million houses which will be distributed for free for the country’s 1.6 million informal settlers and more than nine million families who are renting apartments or are sharing spaces with their extended families.

Talking to residents in Brgy. Subangdaku, Pacquiao assured them that his government will not only complement the ongoing reclamation housing project but would also work closely with the local government units for the full and immediate implementation of his plan to provide free housing for all homeless Filipinos.

Many homeless Filipinos left out of cash aid – CHR