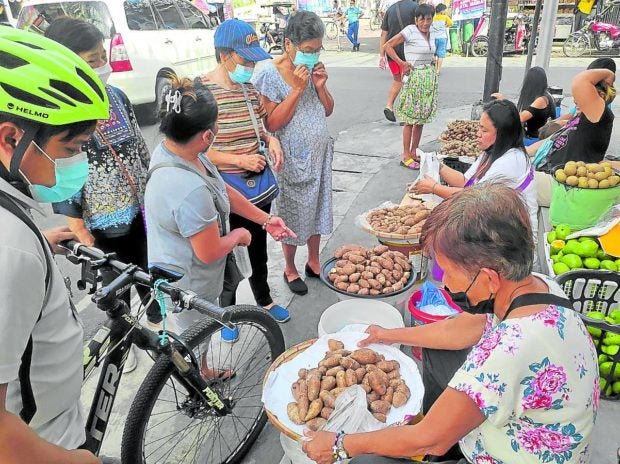 ‘TUGI,’ ANYONE? Vendors make a killing from selling the locally grown root crop, which is grown only once a year and eaten during the Feast of the Immaculate Conception, from a sidewalk in front of the Sta. Maria Church in Poblacion, Sta. Maria, Bulacan province. —CARMELA REYES-ESTROPE

SANTA MARIA, Bulacan, Philippines — It was a familiar scene before the pandemic, but still a pleasant surprise for vendors outside the Basilica Minore of La Purisima Concepción in the town center, as they did brisk sales from the root crop grown only once a year in time for this town’s fiesta.

On Thursday, the municipality of Sta. Maria was finally able to celebrate its annual Feast of La Purisima Concepción (Immaculate Conception) after Bulacan province had been placed under Alert Level 2.

Devotees and tourists flocked to the sidewalk vendors selling “tugi” (Dioscorea esculenta) — a tuber similar to taro, which is grown only once a year and is considered a delicacy prepared and eaten mainly during the feast day.

Tugi (also spelled locally as tuge) is boiled like camote (sweet potato) or fried like camote chips, and is sometimes served in Ilocano vegetable-based stew dishes like “pinakbet,” “bulanglang” and “sinigang.”

This year’s 230th feast day is more meaningful to devotees because the Sta. Maria Church was declared a Basilica Minore, or a church of historical and architectural value, in November last year.

Shallow baskets of cooked tugi are displayed whenever the feast day of La Purisima Concepción is celebrated every first Thursday of February.

Growing and selling tugi has been a livelihood for 70-year-old Teodora Sta. Ana, which she inherited from her mother.

She remembered that a kilo of tugi used to sell for P5 when she was a child.

“She brought me to the tugi farm when I was 5 years old. We planted and harvested the tubers together and I’ve been doing that as a young woman and even after I got married and raised a family. The job may be seasonal but I like working the fields,” she said.

Sta. Ana said they would plant tugi in May, on vacant lots in the hilly areas of the villages of Balasing and Catmon, and harvest the root crops in January in time for the feast day.

She sold a kilo of the root crop for P100 on the eve of the fiesta. She recalled selling as much as P40,000 worth of tugi in 2019, a year before the coronavirus pandemic.

Last year, only a few crops were sold, as there were also few churchgoers during the feast day, Sta. Ana said.

Tugi is also sold from November to January in the Bulacan towns of Bocaue, Marilao, and Obando, and in Meycauayan and Valenzuela City in Metro Manila.

But it is during the February feast day when tugi is much sought after because it is part of the day’s meals for the locals.

“When we talk of tugi, it means the Feast of La Purisima Concepción in Sta. Maria,” said Jaime Salvador Corpuz, a local historian.

He added, “The feast of La Purisima Concepción would not be complete without tugi … sold outside the church. This is the day when the root crops are brought down from Montalban and Norzagaray at the foot of the Sierra Madre to highlight [their] relevance to the patron saint.”

There have been anecdotal accounts of residents planting tugi who had similar dreams of their patron saint visiting and walking along the plots where the crops are grown before her feast day.

But progress now threatens this livelihood, a tugi vendor said.

Sta. Maria, which has a population of about 300,000, is host to large agro-industrial companies that have become a major source of income for the municipality.

Flora Balani, a 56-year-old tugi vendor from Barangay Catmon, also observed that “in the next few years, we may no longer have sufficient space to plant tugi with the expansion here of subdivisions.”