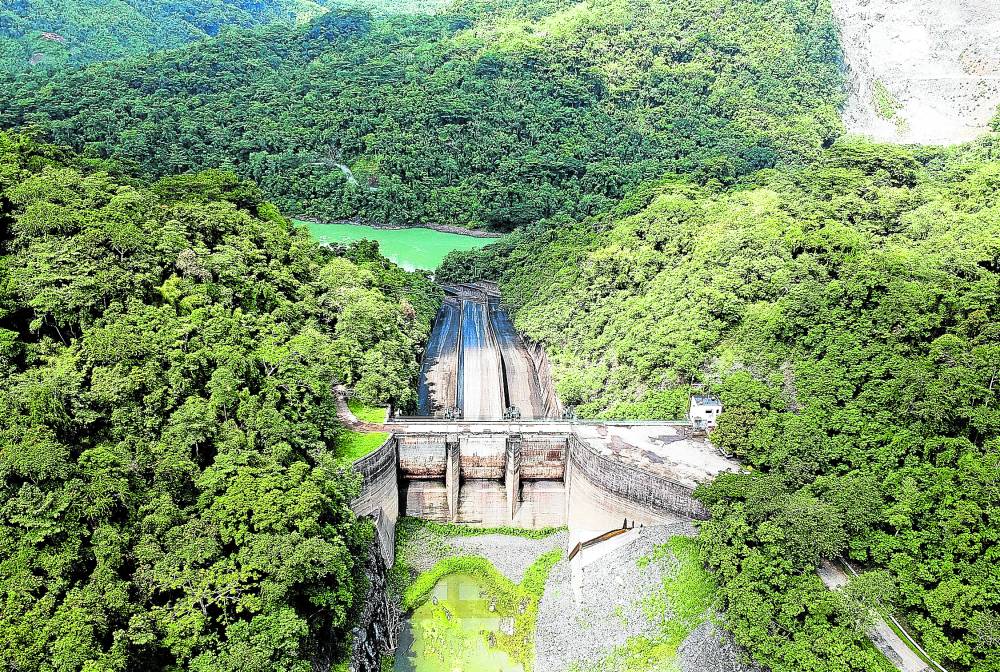 BETTER PRAY FOR RAIN The spillway of Angat Damin Norzagaray, Bulacan province, in a photo taken during a dry spell in June 2019. The water level is “not normal” lately, according to a Pagasa hydrologist. —GRIG C. MONTEGRANDE

With Angat Dam’s water level dipping further, the state weather bureau said at least three to four storms moving at a slow pace were needed to fill the reservoir and allow it to return to its normal operating level.

Angat supplies 98 percent of the potable water in the National Capital Region (NCR), powers a hydroelectric plant, and irrigates about 28,000 hectares of farmland in the provinces of Bulacan and Pampanga. It is located at Barangay San Lorenzo in Norzagaray, Bulacan.

The current measurement is lower than the rule curve elevation—or what the measurement should be for normal, if not high, operations—which is set at 202.17 masl.

That level, according to Pagasa hydrologist Richard Orendain, is “not normal” for the rule curve as Angat’s normal high-water level is set at 212 masl.

“If you look at our current data, you will see that the rule curve was supposed to be at 202.17 [masl]. But [Angat] is below the rule curve, or lacking around 5 m.“

“This means that the operation is not normal,” Orendain told the Inquirer.

The slower, the better

To hit at least 200 m, or near its rule curve elevation, one storm bringing continuous heavy rains should pass over the dam directly.

“The Angat water level currently is at 196.97 [masl]. If you will just aim for this to hit at least 200 m or to at least equalize the rule curve, there is a possibility to have just one storm for that particular measurement,” Orendain said.

For the dam to hit its normal high-water level, he said, three to four storms, dumping the equivalent of around 1,200 millimeters of rainfall, would help it reach that state of 212 masl.

“There has to be three to four storms if we want the dam to reach its normal high-water level of 212 masl. The rainfall should at least directly pass through the watershed,” he explained.

The slower the storm, the better, Orendain said, pointing out that a tropical depression would also be sufficient since it could bring “a lot” of rain.

In their recent forecasts, Pagasa weather specialists said no weather disturbances were expected to enter the Philippine area of responsibility anytime soon.

They said isolated rains and thunderstorms were expected only over northern Luzon because of the northeast monsoon, or “amihan.”

Orendain said isolated rain showers or even a low-pressure area would not be enough to bring Angat to its normal high-water level, suggesting that based on Pagasa’s calculations, storms bringing heavy and continuous rainfall would be most beneficial for the dam.

He said, however, that Angat at its current water level could still supply what was needed for household use and even irrigation.

He did not say which part of the allocation was affected—whether irrigation or the supply of the water concessionaires—Maynilad and Manila Water—for Metro Manila.

But it was reported recently that Angat’s dropping water level had forced the government to reduce the irrigation allocation for farms in Bulacan and Pampanga for the sake of maintaining a normal water supply in the NCR.

Nevertheless, Orendain said Angat could still meet the demands of the water concessionaires for Metro Manila’s water supply, irrigation, and even power generation, as long as it would not hit the 180-m level or below, which is considered the “low water level.”

From his estimates, Angat may reach that level by the end of March, at which point, based on protocols, the allocation for irrigation may be reduced further or cut entirely.

“As long as we don’t reach that number [of 180 masl], the supply for irrigation will not be removed,” Orendain said.

The critical level is 160 masl, he said.

Orendain calculated that should Angat dip to 180 masl, around 1,600 to 1,800 mm of rainfall, or five to seven storms, were needed to raise the water level to its normal high of 212 masl.

“As early as December, we had been reminding everyone, the public, to conserve water since we weren’t able to reach the normal high-water level for Angat at that time,” he said.