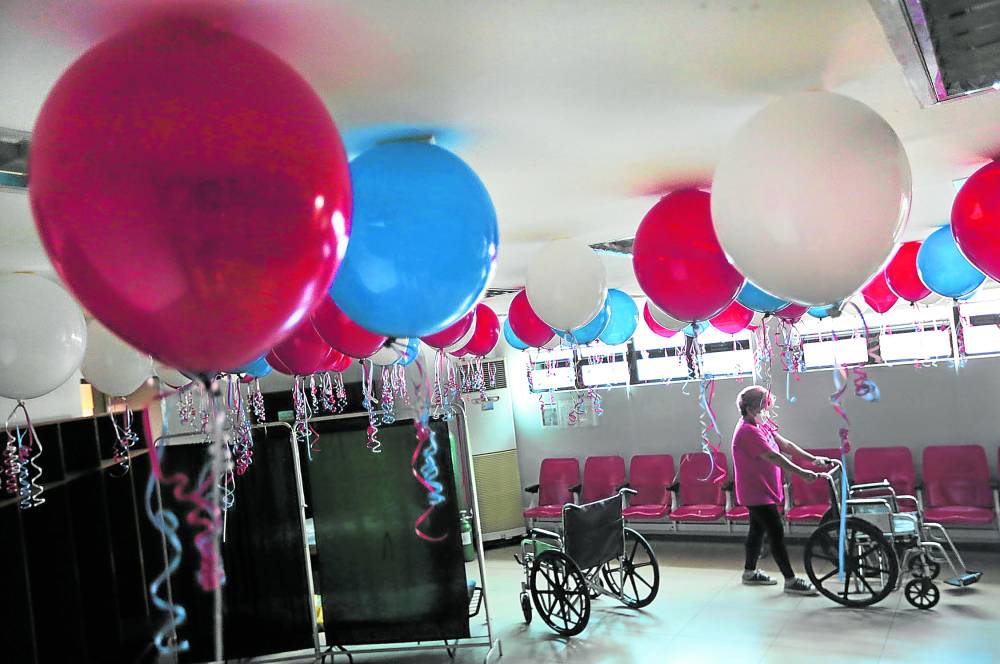 KIDDIE COME-ONS
A party atmosphere—complete with balloons, ribbons and cartoon character standees—should do the trick to help calm the nerves of kids age 5 to 11 who are expected to turn up for their COVID-19 shots at FilOil Flying V Center in San Juan City next week. —GRIG C. MONTEGRANDE

The government has scheduled another nationwide COVID-19 vaccination drive for next week to increase the number of people getting either their primary doses or booster shot.

The third nationwide “Bayanihan Bakunahan” is set on Feb. 10 and Feb. 11, according to Health Undersecretary Myrna Cabotaje, head of the National Vaccination Operations Center of the Department of Health (DOH).

“It is important to ramp up the vaccination of our [categories] A2 (senior citizens) and … A3 (persons with comorbidities) because the numbers are a bit low,” Cabotaje said at the Laging Handa briefing on Friday.

Cabotaje also defended the government’s planned inoculation of minors, saying that “there are mothers and even children who are eager to be vaccinated. We will continue [this program] and let the process of the TRO (temporary restraining order) take its course.”

She was referring to the petition filed before the Quezon City Regional Trial Court by two parents—Dominic Almelor, a former TV reporter, and Girlie Samonte, mother of a bedridden son—seeking a TRO on the initial vaccination drive for the 5-to-11 age group, which the government scheduled on Friday but postponed to Monday.

She said data showed that 97.6 percent of 8.7 million children vaccinated worldwide did not experience any adverse effects.

Meanwhile, the Philippine Pediatric Society (PPS) and Pediatric Infectious Disease Society of the Philippines (PIDSP) reiterated that vaccination was the best way to protect children from COVID-19, as they expressed alarm over some of their colleagues saying otherwise.

“It is alarming that recent reports in media and social media platforms highlighting the views of a few doctors have caused undue fear and have stirred considerable vaccine hesitancy among parents and guardians,” the doctors’ groups said in a statement.

“Let us be clear and unequivocal: COVID-19 … directly affects children and may lead to serious consequences,” they added.

PPS and PIDSP urged parents to discuss vaccination with their health-care providers and obtain their information “from reputable sources with the right experience and expertise.”

They also noted that only 3.22 percent of 87,884 suspected adverse reactions recently reported by the Food and Drug Administration were from the pediatric age group.

The doctors said “most … reactions in children were nonserious such as dizziness, vaccination/injection site pain, pyrexia, headache, and increased blood pressure. There were only two cases of myocarditis and one case of pericarditis reported in the adolescent population, … though causal link to the vaccination is being reviewed.”

They maintained that “the benefits of vaccination still outweigh the risks,” and that “no serious adverse events nor deaths were found related to … vaccination.”

In an advisory, the DOH said that contribution of children between 0 and 11 years old to the total pediatric cases was higher during the Omicron wave last January compared with the Delta wave late last year.

“Cases among the 0 to 11 age group comprised an average of 56 percent of the total pediatric cases in September and this climbed up to 69.2 percent in January,” the department said.

The DOH reported 8,564 new coronavirus infections on Friday, the fourth straight day that the daily tally fell below 10,000.

Yet amid the decline in new cases, Dr. Guido David, fellow of independent pandemic monitor OCTA Research, said infections in 11 provinces continued to increase as manifested by their “positive” one-week growth rates.

Still, the new cases in the latest DOH bulletin were slightly lower than Thursday’s 8,702, even as the tally did not include figures from six laboratories which failed to submit their data to the DOH.

Most infections in Metro

Metro Manila was back on the list of regions which registered the most number of cases with 907, followed by Western Visayas with 782, and the Davao Region with 753.

The country’s positivity rate was 24.3 percent, lower than the 25.5 percent on Thursday. This was based on 37,932 people tested on Wednesday.

There were 46 new fatalities, which raised the death toll to 54,214. The DOH said 26 deaths were from this month, while the rest happened between October 2021 and January 2022 and were reported only on Friday.

Friday’s bulletin said 21 percent of ventilators in Metro Manila were in use, against 22 percent for the whole country.