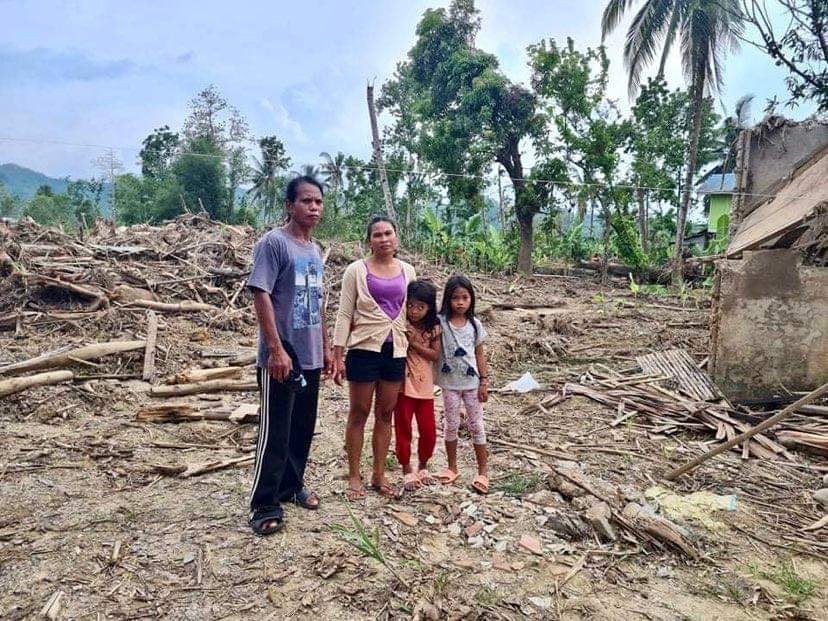 The Cardinal family of Purok Lubi in Barangay Gil Montilla, Sipalay City, stand on where their house used to stand before raging waters of Typhoon Odette washed it away. They will receive a shelter starter kit from Vice President Leni Robredo on Saturday. (Contributed photo)

BACOLOD CITY — Vice President Leni Robredo will be in southern Negros Occidental on Saturday, Feb. 5, for the ceremonial turnover of shelter starter kits to 250 families whose homes were destroyed by Typhoon Odette in December last year.

This was disclosed by former Gov. Rafael Coscolluela, campaign manager of Robredo for Negros Occidental and provincial chair of the Robredo People’s Council (RPC).

Coscolluela said the Office of the Vice President would undertake the project with the Negrense Volunteers for Change led by Millie Kilayko.

From the Bacolod-Silay Airport, the vice president’s party will proceed to Sipalay City, where the turnover program for 50 family recipients will be held.

She will then travel to Barangay Mambugsay in Cauayan town for a similar turnover ceremony for 45 families, Coscolluela said.

Also to receive housing materials from Robredo are 50 families from Kabankalan City, 45 from Hinoba-an, and 30 families each from Candoni and Ilog towns.

RPC-Negros Occidental operations head Edwin Nacionales said they were expecting thousands of “pink warriors” to join the caravan Saturday during the opening of the Robredo campaign center in Hinigaran town.

Nacionales said many Bacolod-based “pink” volunteers had signified interest in joining the activity to be participated in by local political leaders and multi-sectoral groups.