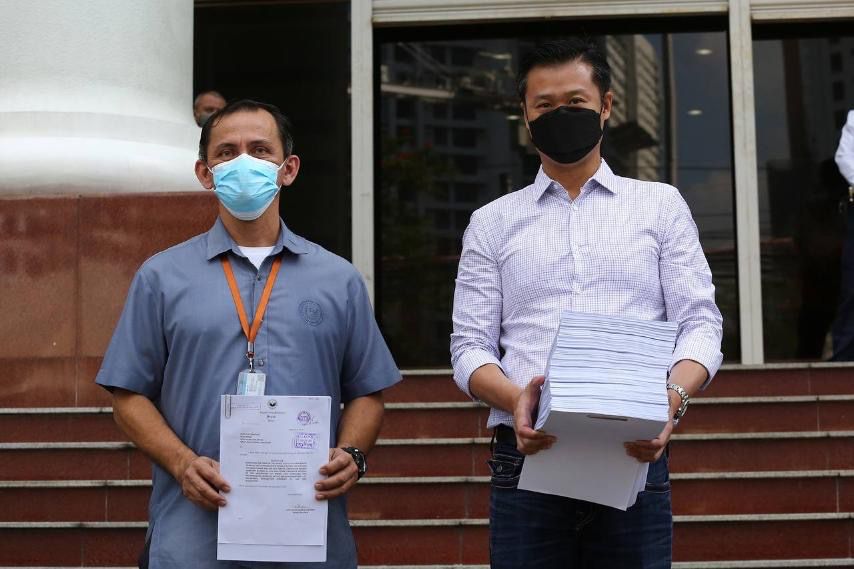 (Photo from Office of Senator Gatchalian)

MANILA, Philippines — The Senate resolution seeking the filing of administrative and criminal charges against Department of Energy (DOE) Secretary Alfonso Cusi and other department officials over the approval of the sale of a majority stake in the Malampaya gas field was transmitted Friday to the Office of the Ombudsman.

Senator Sherwin Gatchalian, chairman of the Senate committee on energy, transmitted the resolution to the Ombudsman together with his lawyers.

During its plenary session on Wednesday, the Senate adopted a resolution “expressing the sense of the Senate to file the appropriate criminal and administrative charges before the Office of the Ombudsman and the Civil Service Commission against Secretary Alfonso Cusi and other Department of Energy officials for approving and recommending approval of the Chevron Philippines-UC Malampaya transaction contrary to law and regulation.”

The filing of charges, Gatchalian said, would give involved individuals a chance to “defend themselves in the proper venue.”

Gatchalian earlier delivered a privilege speech, accusing Cusi and other key DOE officials of being “criminally and administratively liable for graft, gross neglect of duty, and grave misconduct” for “railroading” the approval of the sale of the participating interest of Chevron in Malampaya gas field.

Gatchalian alleged that the DOE officials went against laws in order to give their approval to the sale of the 45 percent participating interest in the Malampaya gas project of Chevron Malampaya LLC Philippines, now known as UC 38 LLC, to UC Malampaya, an indirect subsidiary of Udenna Corporation.

The DOE, for its part, has maintained that the Malampaya sale to the Udenna subsidiary is “above board.”

During a Senate Energy Committee hearing in September last year, DOE officials affirmed the financial soundness and legality of the $565-million transaction between UC Malampaya and Chevron deal that transferred 45 percent stake in the Malampaya Energy project to the Udenna Group of Davao businessman Dennis Uy.

“When the DOE stretched the application of DC 2007 it affected, among others, the evaluation of our Financial Services. Based on the memorandum we submitted, you will find that there were two entities evaluated: UC 38 which is the new name of Chevron, and of course UC Malampaya,” DOE Energy Resource Development Bureau Director Cesar de la Fuente said.

INQUIRER.net has reached out to Cusi for a comment but has yet to receive a reply as of posting time.