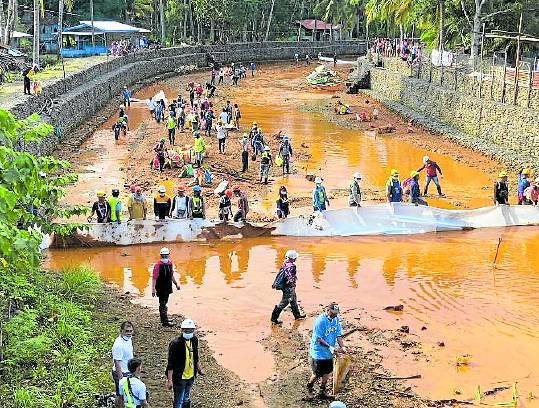 PREVENTING SPILL A new settling pond is built at the mine site of Arc Nickel Resources Inc. to contain silt from the company’s operation and help prevent another waste spill into the rivers of Banaybanay, Davao Oriental. —PHOTO COURTESY OF ARC NICKEL RESOURCES INC.

DAVAO CITY—The companies blamed for the siltation of rivers in the boundary of Pantukan town in Davao de Oro and Banaybanay town in Davao Oriental are setting up structures in their mining areas to prevent waste from reaching local waterways and the sea, they said in a statement on Tuesday.

Riverbend Consolidated Mining Corp., a holder of the mineral production sharing agreement for a 6,000-hectare area in Banaybanay, and its operator, Arc Nickel Resources Inc. (Anri), said a megapond that they built in Mararag 1, which would hold 77,000 cubic meters, would be completed on Feb. 15. Another megapond in Maputi, which would hold 85,840 cu. m, would be completed on Feb. 10.

Company officials said they were also building 13 settling ponds and silt curtains in strategic points “to prevent silt from going to the sea.”

They also reported that they initiated “zero discharge” of wastewater by suctioning off the impounded water. 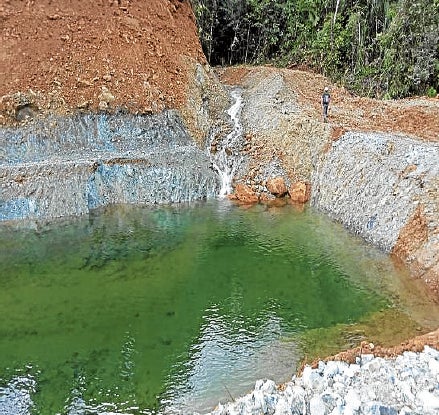 Their action was in response to the order of the Mines and Geosciences Bureau (MGB) to improve the company’s environment control systems to prevent a repeat of the discoloration and siltation in Mapagba and Pintatagan rivers in Banaybanay following heavy and continuous rain last month.

Josue Lapitan, Anri president and chief operating officer, said the company implemented steps to address the siltation and discoloration of the rivers immediately after they discovered the incident.

“With the prescribed environmental control improvements already in place, we are seeing significant progress in the cleanup and rehabilitation efforts, and are confident a similar [incident] won’t happen again,” Lapitan said.

He said the company had been giving out food assistance to affected residents and hired villagers for a cash-for-work program to help in the cleanup efforts and in planting bamboo along riverbanks and other areas to prevent erosion.

“We would like to express our sincere apologies to all those in the affected communities and we assure them that their welfare is of utmost importance to us. We are working as fast as we can to clean up the affected rivers and thus, lessen the inconvenience,” Lapitan added.

In December last year, the municipal government of Pantukan passed a resolution asking the MGB to stop Anri’s operations, noting that the construction of a road leading to the mining sites could have contributed to the discoloration of the rivers.

Dayanghirang, in a Jan. 20 letter, asked Environment Secretary Roy Cimatu to cancel the permit of the mining company.

The governor cited the company’s alleged violations of environmental laws which caused the river water to turn orange, due to nickel laterite, following the heavy downpour on Jan. 13 and Jan. 14.

“Based on the findings of my technical personnel, the siltation ponds were not wide and deep enough, causing the discolored water discharges to overflow while some portions of the discharges were not directed to the catchment ponds,” Dayanghirang wrote Cimatu. “The company’s environmental mitigating measures and preparedness to address unforeseen events is not enough,” the governor added.

“This blatant disregard by the company of environmental protection had caused immeasurable environmental damage, and should be given corrective measures,” he said.