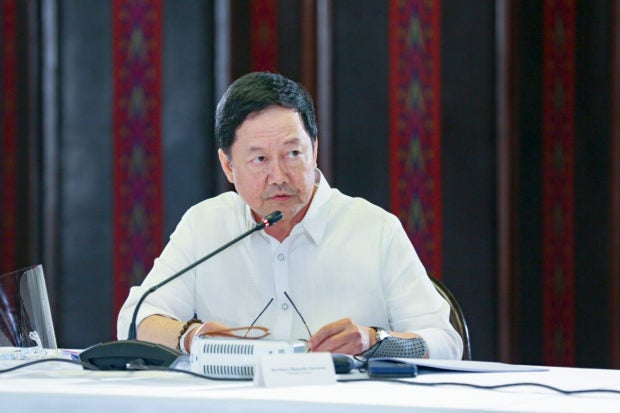 MANILA, Philippines — The Department of Justice (DOJ) will give “preferential attention” to the Pharmally probe findings, Justice Secretary Menardo Guevarra said on Wednesday.

The findings include the recommendations of two separate legislative panels that investigated alleged irregularities in the government’s multibillion-peso pandemic supply contracts with Pharmally Pharmaceutical Corp., an undercapitalized trading company.

Guevarra said he was expecting the Senate blue ribbon committee and the House Committee on Good Government to provide the DOJ and the Office of the Ombudsman copies of their reports on their inquiries into the deals between Pharmally and the Procurement Service of the Department of Budget and Management (PS-DBM).

The House committee released its report on Monday with recommendations for the criminal prosecution of several Pharmally executives and former officials of the PS-DBM, which bought the supplies on behalf of the Department of Health (DOH).

NBI to do validation

Guevarra said the DOJ would conduct a preliminary evaluation to check whether the National Bureau of Investigation should validate the evidence obtained by the lawmakers.

“If in the affirmative, the NBI will be directed to conduct its investigation and build, if necessary, on the evidence already gathered by Congress,” Guevarra told reporters.

Asked if the DOJ, which had been tasked with leading the Task Force Against Corruption, would prioritize the biggest corruption scandal under the Duterte administration, the justice secretary said: “We’ll give it our preferential attention once it gets to us.”

The investigation by the House and the Senate panels was triggered by Commission on Audit (COA) reports on the use of the DOH pandemic response funds, including P42 billion that was transferred to the PS-DBM without proper documentation.

As a result of their inquiries, the legislators found that up to P11.5 billion in contracts were awarded to Pharmally in 2020 and 2021. The total was the biggest chunk won by a single company that had a paid-up capital in 2019 of only P625,000.

The two reports, however, differed substantially, with the Senate blue ribbon committee accusing Mr. Duterte of complicity in “one of the biggest plunders of the Philippines’ coffers in recent history.”

The blue ribbon panel said the president betrayed the public trust and “must be held accountable” but did not recommend any specific charge against him.

It recommended various other charges against Duque and the others, including plunder, graft, corruption, falsification of public documents and estafa, or fraud.

House committee chair and Diwa Rep. Michael Aglipay said that, unlike the Senate panel, his committee found “no evidence to support the other charges” linking Duterte and Yang to the Pharmally scandal.

“For example, Michael Yang is not liable in this Pharmally case. He is just a financier, and lending money is not a crime,” he told reporters.

He added that appointing officials in the PS-DBM and associating with Yang, which the president was accused of, also weren’t crimes.

His panel recommended the filing of only two charges:

His committee also did not recommend charges against Lao and other top government officials also because of “insufficiency of evidence.”

Despite the differences between the two reports, Aglipay said, “[We] stand by our own findings—knowing that we have based our recommendation on testimonial and documentary evidence only.”

Sen. Richard Gordon, the head of the blue ribbon committee, called on his colleagues not to allow a “tragic” division of the Senate along partisan lines when they vote on his panel’s report.

“The only thing that should divide the Senate is between truth and lies,” he said.

“Senators are representatives of the people, and when the best interest of every man, woman and child, already suffering death, illness, joblessness and despair during the pandemic, is reported to be compromised, it is our job to get to the truth and make sure that those who are responsible are made to account for the added agony they inflict on our people,” he said.

He said that the investigation uncovered “reprehensible fraud, waste and abuse in the Philippines’ pandemic response rooted in a system of syndicated corruption.”

Cabinet Secretary Karlo Nograles, the acting presidential spokesperson, said in an interview with ANC Malacañang had no comment on the Senate report because it was “just partial and unofficial.” Besides, he added, they had no official copy of it.

Nograles reiterated Duterte’s earlier pronouncements that those claiming wrongdoing on the part of the government officials and private persons involved in the Pharmally controversy should just file cases in court.

“He is not protecting anybody here and whoever should be charged, you should charge them already,” he said.

Nograles recalled thatDuterte was angered by the many Senate hearings that Cabinet members and senior government officials were compelled to attend where they were either asked the same questions over and over or were not questioned at all.

Their attendance in the Senate hearings also prevented them from doing their jobs in managing the pandemic, that is why the president ordered them to ignore the inquiry, Nograles said.