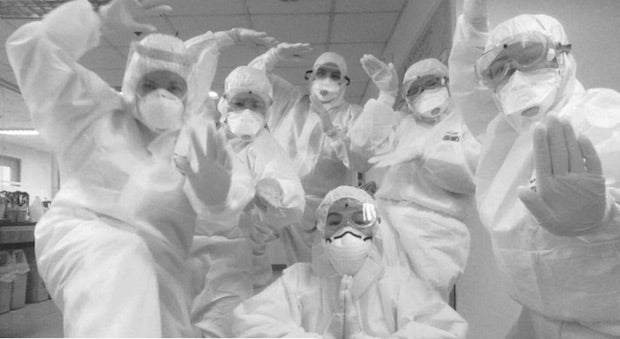 Some of Manila’s frontliners in the fight against COVID-19. (Photo from the Manila Public Information Office)

MANILA, Philippines — Congress ratified on Wednesday the reconciled version of a bill granting mandatory benefits to frontliners in the COVID-19 pandemic and other future public health emergencies.

Specifically, the bicameral conference committee ratified the report on the disagreeing provisions of House Bill No. 10701 and Senate Bill No. 2421, The proposed law now only needs the approval of President Rodrigo Duterte.

Under its reconciled version, the bill will cover not only frontliners during the COVID-19 pandemic but also during other national health emergencies.

The bill seeks to grant a monthly health emergency allowance ranging from P3,000 to P9,000 depending on the “risk exposure categorization” of the frontliners. It also provides for compensation for sickness or death, among other benefits.

“The bicameral conference agreed to expand the coverage of the measure. Where the Senate version only covered healthcare workers at the frontlines of the COVID-19 pandemic, the version from the House of Representatives included those who may face other public health emergencies that may arise in the future,” said Sen. Sonny Angara, chairman of the Senate finance committee and sponsor of the bill in the upper chamber.

He added that the bicam also adopted wording in the bill to clarify that the benefits would also be given to barangay health workers assigned in health facilities, including swabbing and vaccination sites, those administering medical assistance, and those who are part of barangay health emergency response teams.

“This means even the security guards, janitors, cooks, and other staff who are also exposed to COVID-19 like regular employees,” Angara said.

The reconciled bill, he added, adopts a “One COVID-19 Allowance” mentioned in the Senate version and proposed by the Department of Health.

Angara explained that by adopting a “One COVID-19 Allowance” system, the bill “expands the base of health and non-healthcare workers who are eligible to receive the benefit.”

“Previously those who were categorized as ‘low-risk’ did not receive any additional compensation,” he added.

A provision mandating the “creation of an ad hoc grievance board tasked with receiving, investigating, adjudicating, and recommending further action relating to any complaints or failure to receive any of the stipulated benefits” was also agreed upon by the bicam.

The reconciled version also ensures that the period of July to December 2021 will be covered by the measure.

“Language was also included clarifying that if any deficiencies should arise in the payment of 2021 and 2022 benefits, the balance shall be included in the succeeding General Appropriations Act,” Angara noted.