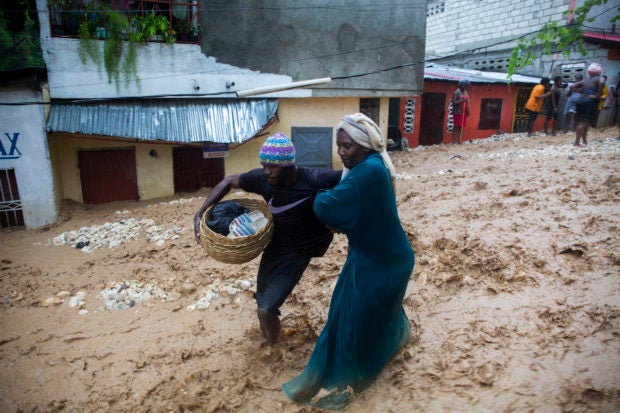 People selling from the market walk in the flooded street in the neighborhood of Pétion ville, Haiti, on August 23, 2020 during the passage of Tropical Storm Laura. AFP FILE PHOTO

Three of the deaths and the missing person were reported in the northwest of the impoverished Caribbean country. The fourth fatality was in the northeast, civil defense officials said.

At least 20 municipalities in the country were affected by the bad weather. Haitian authorities estimated that more than 2,500 houses had flooded, with three completely destroyed.

A bridge serving a small town in the northeast was damaged and an industrial park was flooded in the same area, bordering the Dominican Republic.

However, a full picture of the damage is not yet available as travel in the city is still difficult, the country’s Civil Protection agency said.

Major damage during heavy rains in Haiti is not uncommon due to poor drainage infrastructure.

A lack of an efficient garbage collection system also poses a health hazard during downpours, particularly for Haiti’s poorest families living in informal dwellings near canals or ravines blocked with waste.

Earthquake, storm and floods: no relief in sight for Haiti as toll rises