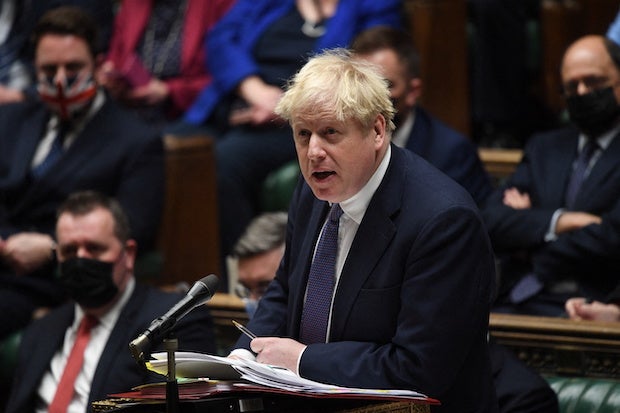 LONDON — British Prime Minister Boris Johnson will deliver a statement to parliament on Monday after he received a civil servant’s report on parties at his Downing Street residence that appeared to breach coronavirus lockdown restrictions.

Johnson, facing the gravest threat to his premiership over the alleged parties at his residence and office at Number 10 Downing Street, has so far weathered calls from opponents and some in his own party to resign by saying people should wait for the report by senior civil servant Sue Gray.

However, the report will be limited in what it reveals. It will only describe events that are not under investigation by London’s Metropolitan Police — a move that has drawn criticism from opposition lawmakers who say it has handed the prime minister a means to dodge the truth.

Gray is looking into what has become weeks of a steady drip of stories about events in Downing Street, with reports of aides stuffing a suitcase full of supermarket alcohol, breaking a children’s swing, and dancing until the early hours.

Accounts of more than a dozen gatherings — including a “bring your own booze” party in the Downing Street garden — have provoked widespread public anger, fuelling the perception that the political elite failed to stick to the tough lockdown rules they set for the rest of the country.

The prime minister’s spokesman has said that Johnson does not believe he has broken the law.

“We can confirm that Sue Gray provided that update to the prime minister,” the spokesman said.

“The findings will be published..and made available in the House of Commons library this afternoon and the prime minister will then provide a statement … when people have had the opportunity to read and consider the findings.”

Gray is looking at several allegations that officials, and Johnson, attended parties in Downing Street and other government offices in breach of the rules they had themselves imposed on the population to fight the coronavirus pandemic. One took place on the eve of the funeral of Queen Elizabeth’s husband, the Duke of Edinburgh.

Gray’s report was seen as crucial to his fate, but its impact might be softened after the opening of the investigation by the police into whether criminal offenses had been committed.

They asked her to make only “minimal reference” to the events they are looking into.

As a result of the police investigation, the document from Gray is not the full account Johnson would otherwise have received. The update will be published later on Monday, and Johnson will also make a statement to parliament at 1530 GMT.

“The fact that Number 10 is backpedaling on ever releasing the whole Sue Gray report is as disgraceful as it is predictable,” Ed Davey, leader of the opposition Liberal Democrat party, said on Twitter.

But the delay in delivering the report has also given Johnson and his supporters time to try to persuade colleagues not to trigger a confidence vote in him.

Asked if he thought he had broken the rules, Johnson said earlier on Monday: “You’re going to have to wait and see the outcome of the investigations … but of course, I stick absolutely to what I said in the past.”

Johnson has apologized for errors that were made and said he attended one garden party thinking it was a work event but has rejected calls to quit.

Assailed by scandal, UK’s Johnson fights for his job

‘In the name of God, go’: UK’s Johnson faces demands to resign