Florida is so cold iguanas are falling out of trees 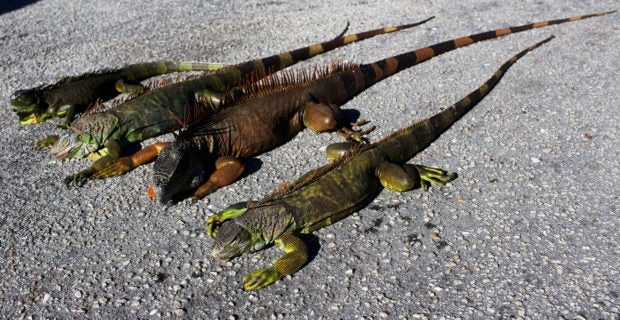 The U.S. National Weather Service Miami-South Florida warned the public on Sunday that immobilized iguanas could fall out of trees due to the unusually cold temperatures across the region.

“Iguanas are cold-blooded. They slow down or become immobile when temps drop into the 40s (4-9 Celsius). They may fall from trees, but they are not dead,” the service said on Twitter.

Temperatures in South Florida reached a low of 25 degrees Fahrenheit on Sunday morning, according to the National Weather Service, and high temperatures on Sunday were expected to remain in the upper 50s to low 60s.

The nation’s Northeast was walloped on Saturday by a deadly winter storm that prompted several states to declare emergencies and forced the cancellation of more than 1,400 flights.

“Their bodies basically start to shut down where they lose their functions and so they are up in the trees on the branches sleeping and then because it gets so cold, they lose that ability to hang on and then they do fall out of trees a lot,” Cohen said.

Although most of the reptiles will likely survive this period of immobilization, Cohen said freezing temperatures were a threat to their survival and pointed to a cold snap in 2010 that wiped out a large number of the population.

“Cold is a very, very life-threatening thing for them because they are from parts of Central and South America close to the equator where it always stays very warm,” she said.

Green iguanas are not native to Florida, according to the Florida Fish and Wildlife Conservation Commission. They were accidentally introduced as stowaways in cargo ships and are considered invasive species. They can weigh up to 17 pounds (7.5 kg) and measure over five feet (1.50 meters) in length.

These iguanas are not the first animals to suffer the cold this winter. Hundreds of thousands of farmed fish died from thermal shock in a lagoon in northwestern Greece after a heavy snowstorm crippled the country last week.

Thousands of fish die from thermal shock as cold sweeps Greece
‘One for the record books’: Winter storm blankets US East Coast in snow
U.S. Northeast braces for blizzard bringing up to 2 feet of snow