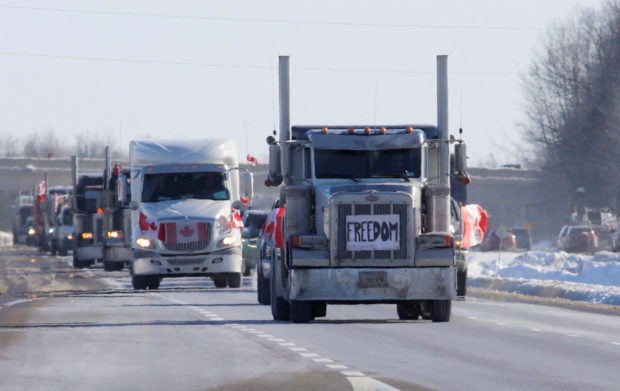 OTTAWA  – Canada’s beleaguered Conservative opposition leader is backing a trucker protest against the Liberal government’s strict COVID-19 vaccine mandates, with critics warning the movement is led by far-right activists with a history of trying to incite violence.

The so-called “Freedom Convoy” – due to bring hundreds of trucks to Ottawa from east and west on Saturday – started out as a protest against a vaccine requirement for cross-border truckers but has turned into a demonstration against government overreach during the pandemic with a strong anti-vaccine streak.

Some political analysts say embattled Conservative leader Erin O’Toole is now using the protest in a bid to gain more support. O’Toole has opposed vaccine mandates since Prime Minister Justin Trudeau announced them in October on the eve of the election.

“The convoy itself is becoming a symbol of the fatigue and the division we’re seeing in this country,” O’Toole told reporters on Thursday.

Canada’s Anti-Hate Network, an independent watchdog, said the convoy’s leading promoters, a few of whom have described the protest as Canada’s equivalent of the violent storming of U.S. Capitol Hill in Washington a year ago, are not truckers but members of the far-right.

The Canadian Trucking Alliance, which represents some 4,500 carries, opposes the protest, saying this is “not how disagreement with government policies should be expressed.” About 90% of Canada’s cross-border truckers and 77% of the population has had two shots.

Action4Canada, one of the organizers, has vowed to stay in Ottawa until the mandates are reversed. “Put an end to the vaccine mandates and all things COVID! It is time for the tyranny and corruption to end,” the group said on its website.

Organizers insist the demonstration will be peaceful, and that was the case for a few hundred people and vehicles that turned out on Friday, a day early. They paraded up and down the street in front of parliament, with some honking their horns while waving Canadian and “Fuck Trudeau” flags.

“We’re staying here as long as it takes,” said Jennifer from Prince Edward Island. She declined to provide her last name. She drove 18 hours to Ottawa in a convoy from the Atlantic coast.

Ottawa police were out in force on Friday, and said they would do the same on Saturday.

O’Toole, facing party calls for a leadership review due to September’s election loss to Trudeau and flagging support in opinion polls, has said he would meet the truckers. He posted a video on social media blaming Trudeau for potential supply chain problems the trucker mandate may cause.

Among past Conservative voters, there was a 26 percentage point drop since last year’s vote of those who have a favorable view of O’Toole, an Angus Reid Institute poll from this week showed.

Around 20-25% of Conservative party voters oppose vaccine mandates, the highest rate among the parties in parliament, according to polls. Canada is now in the middle of a spike in Omicron variant cases that is straining hospitals.

Some convoy participants have threatened and harassed journalists trying to interview them on their way to Ottawa. Ottawa police chief Peter Sloly said on Friday convoy supporters are “inciting hate, violence, and in some cases criminality” on social media.

In an editorial published Thursday in the Toronto Sun, O’Toole acknowledged he was concerned the protest could be hijacked by “individuals who plan to use (it) as a means for violence…. (which would) only serve to delegitimize valid and reasonable concerns”.

Trudeau on Friday said he was concerned about the protest turning violent in an interview with the Canadian Press, and said this week the convoy represented a “small fringe minority” who “do not represent the views of Canadians.”

Just as a rock-throwing anti-vaccine  protester during last year’s campaign brought Trudeau sympathy and support, disruptions resulting from the protest could bolster Trudeau at O’Toole’s expense.

“This is a country that’s all about peace, order and good government,” said David Coletto, chief executive officer of Abacus Data polling company, so if there is violence or chaos, the Conservatives will be seen as “cheerleaders”.

“This is a political gift to the Liberals,” Coletto said.