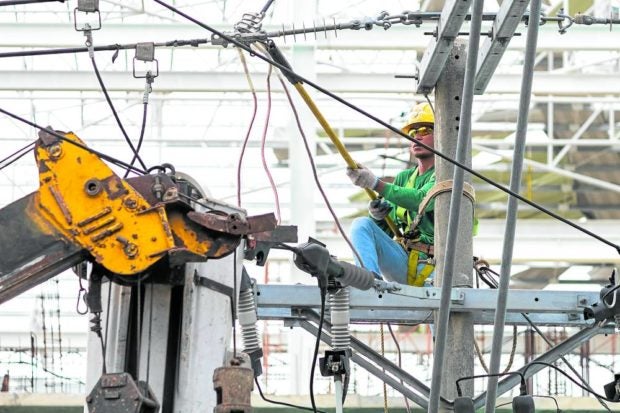 FREE WORK Linemen of Visayan Electric Co., the power distributor of Metro Cebu, and volunteers work round the clock to restore electricity downed by Typhoon Odette (international name: Rai) on Dec. 16 and are not demanding money from consumers for their work, the company said. CONTRIBUTED PHOTO

CEBU CITY—Two linemen and a former accredited electrician were charged in court for allegedly demanding money from Metro Cebu residents who wanted their power supply restored quickly after distribution lines were cut by Typhoon “Odette” (international name: Rai) that pummeled the Visayas and Mindanao on Dec. 16 last year.

The National Bureau of Investigation in Central Visayas said suspects Doroteo Valmoria Auxtero Jr., Bryan Burlaos Sacmar and Maximo Mariot Jr. were arrested by their agents in an entrapment operation in Talisay City on Tuesday.

They were brought to the city prosecutor’s office on Thursday but opted not to undergo a preliminary investigation, prompting the handling prosecutor to elevate the cases in court for violation of Republic Act No. 7832 or the Anti-Electricity and Electric Transmission Lines/Materials Pilferage Act, and Article 318 of the Revised Penal Code.

NBI regional director Rennan Augustus Oliva said their investigation—prompted by a request from Visayan Electric Co., the power distributor in Metro Cebu, to look into some linemen demanding money for power restoration work—led them to Auxtero and Sacmar, the accredited linemen of one of the contractors of Visayan Electric; and their cohort Mariot.

No tolerance for illegal acts

“These individuals were caught red-handed. They asked Visayan Electric consumers for a total amount of P15,000,” Oliva said.

Visayan Electric president and chief operating officer Raul Lucero said the arrest of the three respondents was proof that the company, the second biggest power distributor in the country, would not tolerate illegal acts.

“Let me remind the consumers that they don’t have to pay to reenergize their areas,” he said.