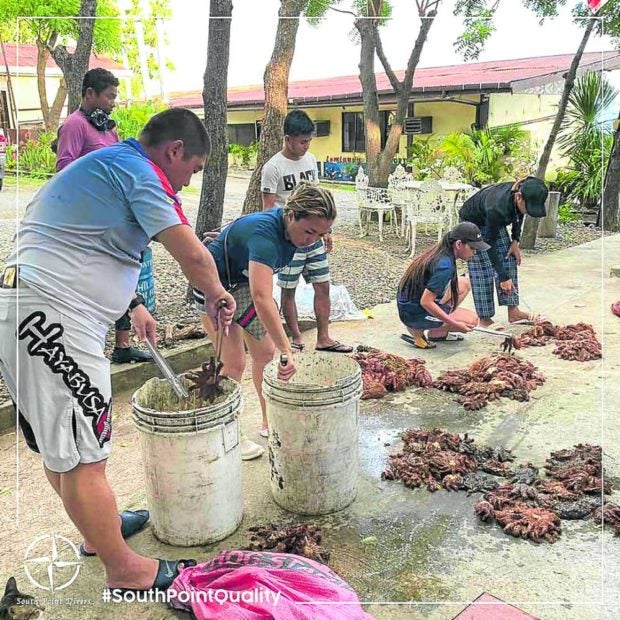 SEA MENACE Volunteers, in this photo taken in November last year, prepare for disposal the crown of thorns starfish that they plucked out of Sarangani Bay. —PHOTO COURTESY OF SOUTH POINT DIVERS

GENERAL SANTOS CITY—The crown of thorns starfish that have been destroying corals in the 215,950-hectare Sarangani Bay Protected Seascape (SBPS) have found their match among women in coastal communities here.

Thanks to a reward of rice given out by the SBPS Protected Area Management Office (Pamo), women volunteers, most of them housewives, are coming out in groups to pluck the crown of thorns out of the sea for good, preventing the invasive species from badly damaging the rich coral system in Sarangani Bay.

Joy Ologuin, head of the SBPS Pamo, said they launched “Dap-ag Kapalit Bugas” (crown of thorns in exchange for rice) in Maasim town, Sarangani province, to combat the infestation that started in the area last year.

The program aims to contain the damage brought about by this species of starfish, a known coral predator, through the help of local communities.

Community volunteers were first briefed on the right way of collecting the starfish to protect themselves against being pricked by its venomous spines.

For every 300 starfish they can gather, volunteers receive a 25-kilogram sack of rice.

Ologuin said that since the program was launched on Jan. 20, at least 11,275 crown of thorns had been plucked out of the sea by volunteers from Barangay Tinoto in Maasim.

In return, the Pamo and the local government of Maasim distributed 42 sacks of rice to 30 participating families in Barangay Tinoto.

“We are delighted that most of our volunteers are women,” said Maria Elvira Lumayag, the provincial environment and natural resources officer of Sarangani.

“Women are strong assets in environmental protection and conservation, especially on issues that need to be resolved with urgency and active participation,” she added.

Ologuin said they were expecting to collect at least 75,000 starfish through the program.

At least 51,491 crown of thorns have been collected, so far, across Sarangani Bay, the Pamo said.

“The effort will continue until our seas are free from the threats brought by these [crown of thorns],” Ologuin added. She said Sarangani Bay had been experiencing crown of thorns outbreaks since November 2021.Considered by the Department of Environment and Natural Resources as a key marine biodiversity area, Sarangani Bay is host to coral resources, including 60 important live hard coral species, 411 reef species and 11 species of seagrass.

Coral reefs are considered the “rainforest” of the sea, home to a variety of organisms, and shelter, refuge and feeding ground of juvenile and adult fish and invertebrates.

Crown of thorns prey on nearly all corals, according to Reef Resilience Network. The network noted that outbreaks appear to be increasing in frequency over the last several decades, causing widespread damage to coral reefs in the Indo-Pacific region.

Dense aggregations of crown of thorns can strip a reef of 90 percent of living coral tissue, the network said.