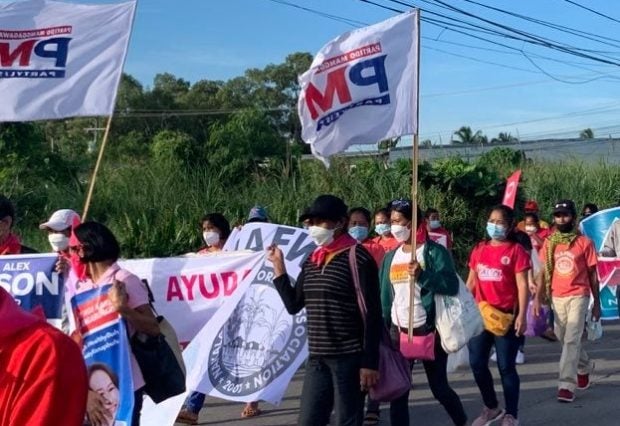 “This is one way to achieve inclusive growth which is an avowed labor market agenda of the government but is evidently not materializing,” PM secretary-general Judy Miranda said in a statement.

The group issued a statement following the release of JobStreet’s report which showed that the telecommunications industry is offering the highest entry-level salary at 20,000, followed by the IT industry at 19,550.

Miranda said telco and IT workers “deserve those wages and maybe even more.” However, she noted that in comparison, the monthly minimum wage in Metro Manila is less than P14,000 and has not increased in three years. She added that in Eastern Visayas, the minimum wage is just above P8,000.

“This wage disparity in non-agricultural wages is bad for workers and not good for inclusion,” she said.

The PM called for a raise in the minimum wage through direct wage increases combined with price discounts, social security subsidies, and public services provisioning. The group also urged the abolition of regional wages and the institution of a national minimum wage.

“President Rodrigo Duterte once upon a time promised to end the system of provincial wages. But similar to his betrayal of the end endo pledge, Duterte will end his term with the regional wage system firmly in place to cheapen workers’ wages,” Miranda recalled.

“In contrast, Vice President Leni Robredo has signed a covenant with labor groups which includes a provision for establishing a national minimum wage and ways to achieve a living wage,” she said.

The labor leader pointed out that a national minimum wage is not only rational considering that the cost of living varies little across the country, but is also efficient since regional and local minimum wages are difficult to enforce.

The PM is a signatory to the covenant along with labor centers and federations that have committed to support the tandem of Robredo and Senator Francis Pangilinan in the May elections.

Read Next
6 kids among 87 new COVID-19 cases in Olongapo
EDITORS' PICK
US Secretary of State Blinken arrives in PH for official visit
FVR in the eyes of reporters: An ally of democracy, free press
TNT brings Sarah G and Mimiyuuuh together for epic collab
House energy committee chair Arroyo bats for cheap electricity
July inflation heats up further to 6.4%
Smart boosts regular load with free data via new Extra Load offers
MOST READ
Hike of seniors’ pension to P1,000 lauded, but fund source murky
Imaginary events can never be history, Binay says of ‘Maid in Malacañang’
Pagasa: Wet, cloudy weekend in most parts of PH due to LPA, ‘habagat’
TV5, ABS-CBN venture in ‘closing stages,’ says MVP
Don't miss out on the latest news and information.