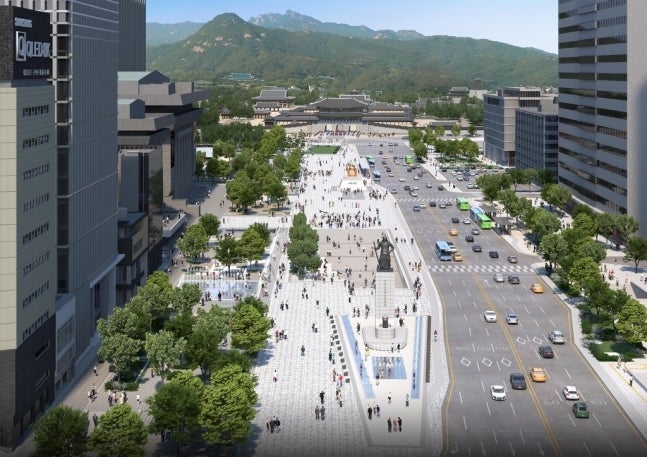 SEOUL — Central Seoul’s iconic Gwanghwamun Square will reopen to the public in July after undergoing a complete makeover, the Seoul Metropolitan Government said on Thursday.

The symbolic square, which has been under construction since November 2020, will return doubled in size to include a park, adding more green space to the area, the city said.

About a quarter of the total area will be filled with greenery, where the city plans to plant some 91,070 trees and flowering plants.

Waterscape facilities — including water fountains and a 260-meter waterway — will be built, and new historical monuments will be installed, the city added.

The square will also be home to various restored cultural assets that will be on display, including a platform from the front of Gyeongbok Palace that was ruined during Japanese colonial rule.

Construction work is currently 52 percent complete, and the remaining work of paving the roads with flagstone and installing monuments will be done by June, the city added.

Gwanghwamun Square was first constructed during current mayor Oh Se-hoon’s previous term in 2009. Under his successor Park Won-soon, the square began the construction for an expansion, which included turning the west side into a park.

The renovated square was initially planned to open in April this year, but the city pushed back the date to secure more time for construction to wrap up safely, as the Serious Accident Punishment Act, which imposes liability on individuals and entities for accidents, will be enacted on Thursday.