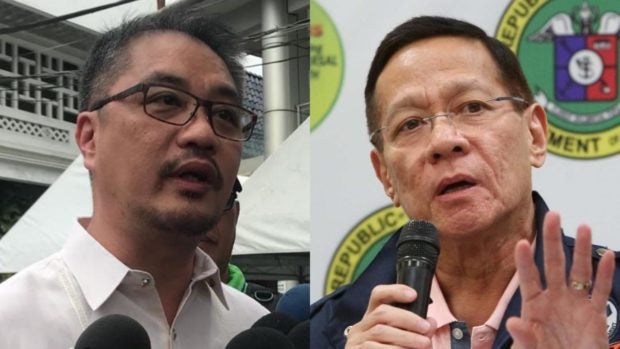 Under Committee Report No. 1393 dated December 16, 2021—a copy of which was only released to the media Wednesday—the House panel recommends the filing of complaint against Duque and Domingo over violation of Republic Act No 6713 or the “Code of Conduct and Ethical Standards for Public Officials and Employees.”

The committee also recommended the filing of charges against Duque, Domingo, and FDA’s Center for Drug Regulation and Research Director Joyce Cirunay for violation of the “Anti-Red Tape Act of 2007” for the supposed “failure to render government services such as approval of applications for automatic renewal within prescribed time.”

The committee, in its report, said the resolution that pushed for the inquiry cited “issuances of the DOH and FDA as having been questioned for being arbitrary, bureaucratic, and inhumane for causing unnecessary delays in the approval and clearance of drugs and therapeutics for emergency use authorization or for use of drugs under compassionate special permit for COVID-19.”

The committee questioned the DOH and the FDA over their “contradictory statements” as well as the agencies’ “openly negative view” on Ivermectin as COVID-19 drug.

The DOH has repeatedly said that ivermectin is still not recommended as a treatment for COVID-19.

“With respect to its policy recommendations, the DOH is inconsistent in its subscription to WHO recommendations, such as when it adopted The WHO guidance against the use of Ivermectin but approved the use of Remdesivir, which The Who advises against,” the committee said.

“The DOH failed to explain the basis for such inconsistency,” it added.

The committee said that the limitation by the clinical practice guidelines (CPG) of the entry and use of investigational drugs and treatment “further constrained the supply of drugs that could have hastened the recovery of COVID-19 patients and even saved lives.”

The committee likewise questioned the DOH and the FDA over their “seeming bias” for particular professionals, particularly towards the Philippine Society for Microbiology and Infectious Diseases, Inc. (PSMID) that proposed the CPG on COVID-19 which was later adopted by the health department.

“There appears to be no review done, considering the DOH officials, in the words of Secretary Duque himself, were not experts in the field of infectious disease and as such, the DOH appeared to be at the mercy of PSMID as they relied solely on the statements of PSMID panel of experts,” the committee said.

“This presents a great danger considering most clinicians simply adhere to the recommendations of the DOH which is of course accountable to the people for the policies and issuances it lays down,” it added.

Rep. Bernadette Herrera-Dy, as cited in the report, likewise pointed out that the FDA’s guidelines for the registration of drug products under emergency use (DEU) for COVID-19 prescribes that “for a drug to be eligible for a DEU, the PSMID has to recommend the need for it.”

“This also raises concerns that the PSMID may have excessive influence over the policies issued and decisions made by the DOH,” the committee said.

The committee also pointed out the application backlogs before the FDA-CDRR, saying that the Anti-Red Tape Authority had already previously recommended the mandatory implementation of the Automatic Renewal provision of the FDA Act on the pending renewal applications for License to Operate and Certificate of Product Registration of drugs.

“There is no reason for the FDA, specifically the CDRR, to have a backlog in its license application processing, especially applications that meet the conditions for automatic renewal,” the committee said.

INQUIRER.net has sought the comment of Duque and Domingo for the story but has yet to receive a reply as of posting time.