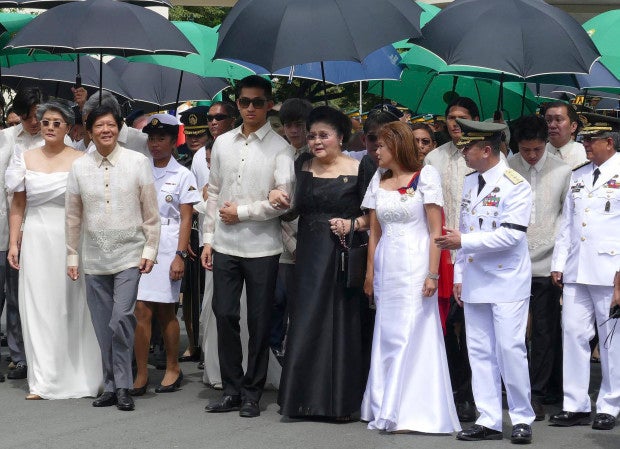 FILE PHOTO: The family of the late dictator Ferdinand Marcos led by wife Imelda Marcos during a ceremony of his burial at the Heroes’ Cemetery in Taguig City on Friday, November 18, 2016. Despite growing opposition, after the Supreme Court ruled that one of Asia’s most infamous tyrants can be entombed in the hallowed grounds, Marcos was buried Friday at the country’s heroes’ cemetery in a secrecy-shrouded ceremony which opponents said mocked the democratic triumph won when a “people power” revolt ousted him three decades ago. Photo provided by Jun Gudoy from the Office of then Ilocos Norte Gov. Imee Marcos via AP

MANILA, Philippines — Ferdinand Marcos Jr. on Tuesday said his family’s history with the United States (US) will not influence his foreign policy should he win as president in the elections this May.

He also said he will not subscribe to the old “cold war mentality” where the world is divided into “spheres of influence of superpowers.”

“We have to create our own foreign policy. Isipin natin (We’d think) what is in the national interest,” Marcos Jr. said.

In 2012, A US Court of Appeals for the Ninth Circuit handed down a contempt judgment against Marcos Jr., his mother Imelda, and the estate of Ferdinand Marcos for violating an injunction that barred them from dissipating assets of the estate.

The contempt award meant that the Marcoses would not be allowed to set foot on any US territory.

READ: What Went Before: The $35M claim on alleged Marcos wealth

The judgment amounting to $353.6 million is believed to be the largest contempt award ever affirmed by an appellate court.

Thousands of martial law victims also won a class action lawsuit for human rights violations against the estate of dictator Ferdinand Marcos in Hawaii in 1986, where they were awarded close to $2 billion.