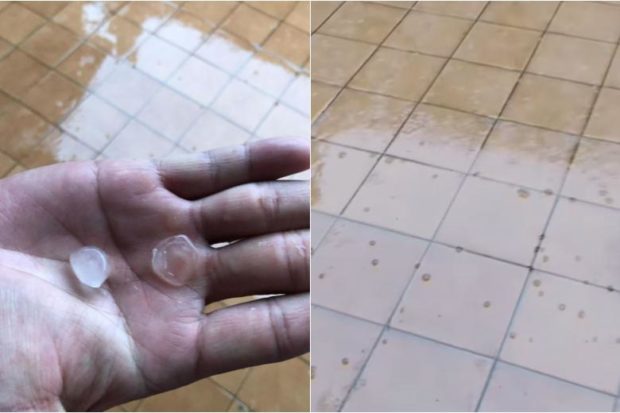 The phenomenon occurred at about 5pm at locations including Ukay Perdana and Wangsa Maju. PHOTO: ADAMCORRIELEE / INSTAGRAM via The Star/Asia News Network

PETALING JAYA — Residents in Malaysia’s capital were shocked when hailstones rained down in some areas around Kuala Lumpur on Monday (Jan 24).

Sinar Harian reported that the phenomenon occurred at about 5pm at locations including Ukay Perdana and Wangsa Maju.

This soon went viral on social media with internet users sharing their own experiences witnessing the hail.

Actor Adam Corrie Lee Abdullah, in a Facebook post, said this was the first time he had experienced such a phenomenon in his lifetime.

“It was raining heavily and suddenly I heard some loud noises. I then went out to check and saw pieces of ice on the floor outside my house,” he said.

The Malaysian Meteorological Department (MetMalaysia) said on its website that hailstones are clumps of ice produced during thunderstorms or by cumulonimbus clouds.

“This usually occurs during unstable weather where strong currents within the cumulonimbus clouds would create clumps of ice.

“Hailstorms then take place when the clumps of ice drop to the ground without melting,” it said.

MetMalaysia added that such storms could occur wherever thunderstorms were, especially areas where strong cumulonimbus clouds are formed.

The public were also warned to take shelter in shaded areas and advised motorists to park their vehicles in roofed locations.

Heavy rain and thunderstorms in Kuala Lumpur on Monday afternoon uprooted trees in five areas but there were no reports of casualties.

“Six vehicles were damaged after being hit by falling trees, which also obstructed traffic. Work to cut and remove the fallen trees on the affected routes was completed at 5.51pm,” said the Kuala Lumpur Fire and Rescue Department operations centre in a statement.

Firemen from the Wangsa Maju, Gombak Selatan, Keramat and Setapak stations were involved in the work to clear the fallen trees.

Hailstones force vehicles to pull over in Laguna