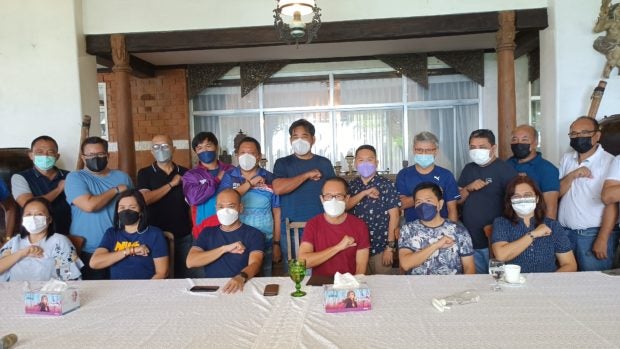 In a press conference Tuesday in Danao City, Mayor Nito Durano, leader of the Barug Alang sa Kauswagan ug Demokrasya (BAKUD) party, said Marcos is their choice for president as agreed upon by all its party mates.

He also said that the Marcoses have long-standing family ties with the Duranos since their fathers, “Mano Amon” and former President Ferdinand Marcos Sr., were good friends.

“Ours is a friendship beyond politics (referring to Bongbong),” Durano said.

Mayor Durano supports Carpio’s vice-presidential bid because her family is traced to Danao City and has proven a good track record in public service.

BAKUD is a dominant political party in Cebu’s 5th congressional district located on the island’s northeast. Its members include seven mayors, six vice mayors, and 57 councilors.

Frasco is a known supporter of the Bongbong-Sara team. But according to Nito, it does not matter who would be chosen as local candidates of Marcos.

“My support is unconditional,” said Nito.

“What we are just looking at is the close alliance and friendship with the Marcoses,” he added.

Ace Durano, a member of the Partido Pilipino sa Pagbabago, was not present during the press conference held at the Durano home in Danao City. He was in isolation because of exposure to COVID-19.

Ace was supposed to make a separate announcement on his choice for president and vice-president in the coming days.

The Garcia-led One Cebu Party has yet to reveal who to support for president and vice-president in the May 2022 polls.