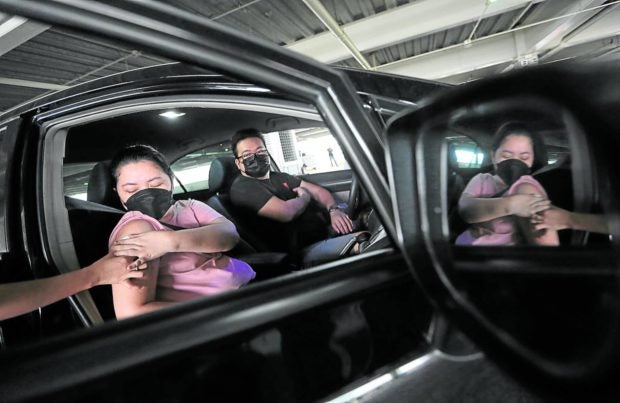 DRIVE AND JAB While COVID-19 infections are slowly declining in Metro Manila, drive-thru vaccination sites, like this one at SM North in Quezon City, continue to receive people wanting to get booster shots. —NIÑO JESUS ORBETA

MANILA, Philippines — The rising COVID-19 cases in the National Capital Region (NCR), driven by the more transmissible Omicron variant, may have already peaked, paving the way for a possible lowering of the alert level over Metro Manila by next month, Health Secretary Francisco Duque III said on Monday.

“It appears it has already peaked and we can see that the number of cases in NCR has been decreasing for the past few days and the percentage it contributes to the total caseload is diminishing,” Duque said during the Laging Handa public briefing aired on state television.

However, he noted that the lowering of the alert level was “not yet cast in stone” because the Inter-Agency Task Force for the Management of Emerging Infectious Diseases (IATF) would have to first review all metrics.

He said the IATF needed to confirm if the two-week growth rate (TWGR) and the average daily attack rate (Adar) were declining, adding that the TWGR should be at moderate-risk level while the Adar should be between one and seven cases, on the average, per 100,000 population.

Health-care utilization should also reach and maintain low-risk category, meaning total bed and ICU (intensive care unit) usage should be below 50 percent, he added. Metro Manila’s total bed utilization is at 41.81 percent, while ICU usage is at 47 percent, according to Duque.

“It’s automatic that if these are achieved, we will go to alert level 2, but this will still be discussed in the IATF as we might need to determine if there is a clear decoupling between [the case count] and the health-care utilization rate. If the case count is still rising, but the severe and critical cases are low, then there is what we call a decoupling and we can go down to alert level 2,” he added.

Duque pointed out that there was no assurance whether the metrics would improve in the coming days or by the time the IATF meets on Thursday to consider alert level changes.

“But hopefully, all that we are doing are effective and we hope we will succeed in really lowering the number of cases by double to triple digits in Metro Manila so that there will be a solid basis for de-escalating to alert level 2,” he added.

Duque also said it was unfair for the World Bank to blame the Philippines’ vaccination rate for the recent spike in COVID-19 cases that had led the government to impose tighter restrictions.

He noted that other countries with a high vaccination coverage also experienced a surge in infections, which was driven by the highly transmissible Omicron variant.

“So with this, you can see that we can refute this analysis being offered by the World Bank,” Duque said at the Laging Handa briefing.

Health Undersecretary Maria Rosario Vergerie also said that while they were seeing a slowdown in the increase in the number of cases in Metro Manila, people should remain on guard against COVID-19 infection.

“We still have to take caution because we don’t have the complete picture here,” Vergeire said in an interview with CNN Philippines.

Vergeire said it was uncertain as to how many others turned out positive for COVID-19 with the use of the rapid antigen tests, blaming the poor reporting by testing facilities and other institutions using them.

The Department of Health (DOH), she said, has a protocol that laboratories, clinics and local governments should submit results of antigen tests that they use.

“Unfortunately, compliance has been very low since the start of the implementation of this measure,” she lamented.

She also noted the lack of accuracy of the results of antigen testing being conducted in the field.

Vergeire said that from the almost 1.2 million antigen test results submitted to the DOH since March 2021, only 30 percent came out to be accurate when validated.

Another guest at the briefing, Octa Research fellow Guido David, said the two-week growth rate was declining not only in Metro Manila but also in the adjacent provinces of Cavite, Bulacan and Rizal.

He said if the trend was maintained, the number of cases by the middle of February would be lower than 1,000 a day, which would mean moderate risk and enable the IATF and the DOH to lower the alert level.

“It’s a big improvement and our projection is that it will hopefully continue until Valentine’s Day, when it will be less than 1,000. By the end of February, it may be less than 500 already and we can already return to our status last November and December,” he said.

As for the whole country, he said surges were continuing or have yet to occur in some areas, leading OCTA to project that the Omicron wave would cease by March and April, when there would be less than 1,000 cases a day.

Five laboratories did not submit data to the COVID-19 Document Repository System, according to the DOH.

The positivity rate—or the percentage of tests conducted that came out positive for COVID-19—was at 40.6 percent, lower than Sunday’s 41.8 percent. This was based on 59,896 people tested on Saturday. The World Health Organization’s benchmark rate of below 5 percent, sustained for two weeks, indicates that virus transmission is under control. INQ