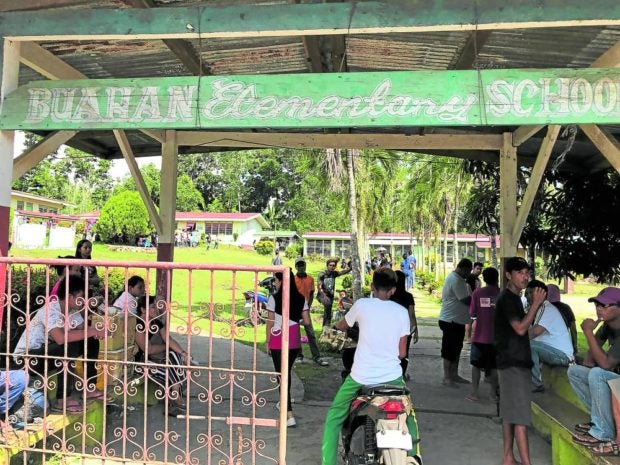 DAVAO CITY—After two years of distance online learning because of the COVID-19 pandemic, more than 10,000 learners and 303 teachers across the Bangsamoro Autonomous Region in Muslim Mindanao (BARMM) are going to resume limited face-to-face classes next month, a top Bangsamoro official said.

Education Minister Mohagher Iqbal, however, said there would be ongoing safety assessments at each school level, which would be validated by a regional team to ensure that every learner and teacher would be safe.

“Health and safety is a priority in the reopening of schools,” Iqbal said when asked if they were not worried that among the 17 regions in the country, the BARMM still posted the lowest vaccination rate, with only 11.14 percent of its target population having taken the full dose of the vaccines as of Jan. 17, based on records from the National Task Force (NTF) Against COVID-19.

Only 18.55 percent of the BARMM’s total population received at least one shot of the vaccine while only .96 percent took the booster shots, according to NTF data.

On Thursday, the BARMM Ministry of Basic, Higher and Technical Education (MBHTE) headed by Iqbal, signed the Inter-Ministry Memorandum Circular (IMMC) for the implementation of a limited in-person learning modality in the region. The circular was also signed by the region’s ministers of health, interior and local government, social services and the Bangsamoro Planning and Development Authority.

“Three other ministries are involved through the signing of the IMMC to gather support from relevant stakeholders and external partners,” Iqbal said.

But aside from the thorough safety assessment, Iqbal also assured there would be no in-person classes in areas that were considered high risk or in alert level 3 category.

The BARMM has identified 33 pilot schools, with 10,699 learners, in which to start the in-person classes although 33 other schools with close to 10,000 students were readily identified as alternate if some of the priority schools could not yet open classes for one reason or another.

Iqbal also said in a statement from the Bangsamoro Information Office (BIO) that the decision to implement limited face-to-face classes came after seven months of “grueling” meetings, seminars and planning workshops with technical working groups to prepare themselves for it.

“This policy will support other BARMM ministries and the school division offices, who are patiently and tirelessly preparing for the moment to accept their learners in their school classrooms,” Iqbal said.

He said the ministry and Schools Division Offices would implement strict health and safety protocols and other critical directives from the BARMM Inter-Agency Task Force.

Assistant Secretary Alfadhar Pajiji, MBHTE focal for in-person class implementation, also assured that the public schools had undergone the School Readiness Assessment and School Safety Assessment Tool as benchmarks for the final list of schools in the pilot implementation of face-to-face classes, the BIO said.

He said that if one of the 33 pilot schools would be disqualified, a school from an alternate list of 33 schools will take its place.

Pajiji said the target date of the piloting campaign for the in-person classes would be on Feb. 14.

The region, which celebrated its third founding anniversary on Jan. 22, is composed of the provinces of Basilan, Lanao del Sur, Maguindanao, Sulu and Tawi‑Tawi. The BARMM has a population of 4,404,288 based on the 2020 census. INQ