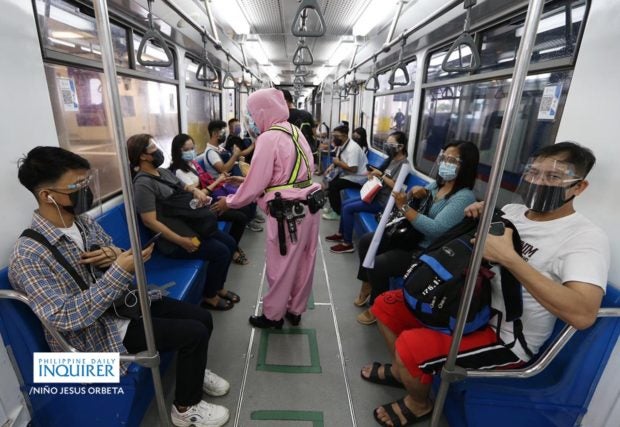 FILE PHOTO. Passengers show their vaccination cards upon entering the Metro Rail Transit Line 3 at Edsa-North Avenue Station to avail of a free ride starting Tuesday to August 20 2021, as the NCR reverts back to ECQ due to the rise of Delta variant COVID-19 cases. Niño Jesus Orbeta/Philippine Daily Inquirer

The following are the monthly ridership in the rail line:

The MRT-3 management noted that the ridership decreased in April due to the modified enhanced community quarantine imposed due to the COVID-19 pandemic.

“A drop in monthly ridership was recorded in April at 2.2 million as Metro Manila was placed under Modified Enhanced Community Quarantine (MECQ),” the management said.

“The increase in ridership continued in June and July, at 3.7 million and 4.2 million, respectively, as Metro Manila eased to General Community Quarantine (GCQ) with restrictions beginning June 16 and to GCQ status on July 15,” it added, noting that it declined in August due to the ECQ.

(MRT-3 provided service to our fellow citizens the whole year round.)

“The continued patronage of our riding public is a testament to how MRT-3 has really transformed from a defective to a reliable, fast, and efficient public transportation that it is now,” he added.

For his part, MRT-3 Director for Operations Michael Capati noted the reduced travel time between North Avenue and Taft Stations from one hour and 15 minutes to 50 minutes.

(In 2021, commuters felt the rehabilitation of MRT-3, wherein travel time lowered and the number of trains in the mainline increased from 10 to 15 to 17 to 22.)

(All the while maintaining strict compliance to COVID-19 health and safety protocols for the safety of passengers.)