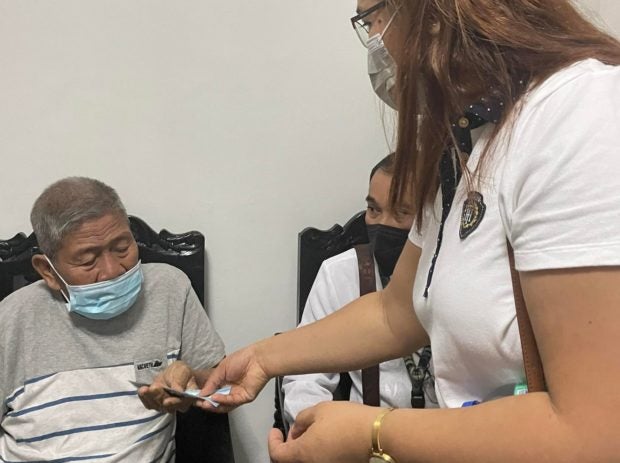 DAGUPAN CITY—The octogenarian who was jailed for allegedly harvesting mangoes he did not own in the Pangasinan town of Asingan had apologized for his alleged misdeed, not only once but three times.

According to records at Barangay Bantog, Leonardo Flores—who had become an unlikely folk hero among netizens for what they regarded as a case of social injustice—had asked for forgiveness from his neighbor, truck driver and quarry worker Robert Hong, who demanded P10,000 from Flores as payment for the fruits stolen from his mango tree in April last year.

Hong, 52, said all he wanted from Flores was an apology, but that has yet to happen.

“I will drop the case if they make a public apology. Just admit they stole from us,” Hong had said.

But Flores, popularly known on social media as Lolo Narding, apologized to Hong when local officials urged them to meet at the Bantog barangay hall on April 26, 2021.

This was the day after Flores reportedly stole Hong’s mangoes and sold them to a buyer.

Flores said he was paid only P600 (not P1,000 as earlier reported)—a mere fraction of the fruits’ estimated market value of P1,200 per crate for a total of 10 crates.

According to a meeting transcript, the 84-year-old Flores (not 80 as earlier reported) said in Pangasinan that “I was forced into this situation. Please forgive me.”

He apologized in that same meeting a second time, saying “Please forgive me. I will not do it again.”

Flores reiterated his apology in yet another meeting on May 6, adding: “Why can’t they forgive me?”

Hong formally charged Flores with theft on May 13 last year before the 7th Municipal Circuit Trial Court of Asingan-San Manuel. He also accused Flores of trespassing.

But after detaining him, the police and netizens who learned of Flores’ detention also contributed to the bail money for his release on January 20.

Flores is due for arraignment on February 8. But followers of this case, including the Commission on Human Rights, have asked both parties to settle their dispute.

James Fernandez, Flores’ lawyer from the Public Attorney’s Office, said his client would issue another apology to Hong before the court.

In the affidavit he filed in May last year, Hong said he saw leaves scattered beneath the mango tree when he arrived at his home on the night of April 25, and was informed by three barangay watchmen that two men had picked all the mangoes from the tree that afternoon while Flores stood watching from the ground.

Hong said the P10,000 he demanded from Flores does not even match the estimated P12,000 he lost from the stolen mangoes.

One of the watchmen, 67-year-old Floramante Paculan, said they did not question the men who climbed the tree because they thought they had Hong’s permission.

A barangay official prevailed on Flores to return the mangoes after Hong reported the theft, but Flores said he already sold the fruits.

“I don’t have them anymore,” he said.

Flores’ case has prompted netizens to compare his situation with the likes of Imelda Marcos.

The 92-year-old former first lady was convicted of graft in 2018, but has been spared from detention by the Philippine National Police, in consideration of  her age.