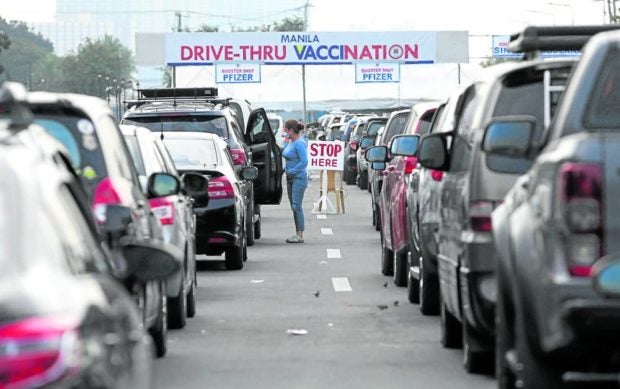 MANILA, Philippines — Nearly 30,000 new COVID-19 cases and 67 more deaths were reported by the Department of Health (DOH) on Sunday, but infections in Metro Manila, the epicenter of the recent surge driven by the Omicron variant of the virus, appeared to slow down.

However, scientists have started keeping a close watch on a recently discovered subvariant of the Omicron strain to determine how its emergence could affect future pandemic spread around the world.

The Omicron variant has become the dominant virus strain in recent months, but British health authorities have identified hundreds of cases of the latest version, called BA.2, while international data suggested that it could spread relatively quickly.

The UK Health Security Agency (UKHSA) identified more than 400 cases in Britain in the first 10 days of this month and has indicated the latest variant has been detected in some 40 other countries, accounting for a majority of most recent cases in nations such as India, Denmark and Sweden.

The DOH has not reported any case involving the new Omicron subvariant in the Philippines.

The UKHSA said it had designated the BA.2 sublineage as a variant under investigation as cases of it were on the increase even if, in Britain, the BA.1 lineage currently remained dominant.

The authority underlined that “there is still uncertainty around the significance of the changes to the viral genome,” which required surveillance.

“What surprised us is the rapidity with which this subvariant, which has been circulating to a great extent in Asia, has taken hold in Denmark,” French epidemiologist Antoine Flahault was quoted by the news agency Agence France-Presse (AFP) as saying.

Scientists must evaluate how the virus, which has engendered the worst global health crisis in a century, continues to evolve and mutate.

BA.2 has yet to be designated a variant of concern—but Flahault said countries have to be alert to the latest development as scientists ramp up surveillance.

On Sunday, the DOH reported 29,828 new coronavirus cases and 67 deaths, some from as far back as June last year but only recorded now. This brought confirmed cases to 3,417,216, which included 53,472 deaths.

According to the DOH, Metro Manila accounted for 18 percent of the latest tally; Calabarzon 14 percent, and Central Luzon, 10 percent.

In Manila, the number of COVID-19 cases continued to decline in recent days, according to data from the city health department.

With more than 36,000 new recoveries nationwide, the number of active cases or people still infected with the virus went down to 273,580, more than 98 percent of whom were mildly ill or asymptomatic.

Two out of every five people getting tested were found positive for the virus, but the 41.8-percent positivity rate out of the 69,014 people tested for COVID-19 last Jan. 21 was the lowest in the past two weeks.

COVID-19 hospital bed occupancy in Metro Manila remained at moderate risk, with 52 percent of ward beds, 48 percent of intensive care unit (ICU) beds and 46 percent of isolation beds in use.

Cases in regions up

The national hospital beds occupancy was a little higher but still at moderate risk, with 53 percent of ward beds, 51 percent of ICU beds and 52 percent of isolation beds in use.

The independent analytics group OCTA Research has noted a decline in the daily new cases reported in Metro Manila while some highly urbanized cities saw a growth in daily cases in the past week.

OCTA Research said Metro Manila could be downgraded from “severe” outbreak to “very high risk,” based on indicators.

The analytics team warned that Baguio City and Iloilo City were now at “severe” outbreak due to a fast jump in cases, while several highly urbanized cities were at “very high risk.”

OCTA Research, however, warned that Metro Manila’s average daily attack rate (Adar), or the number of new cases in a given population, remained very high at 72 per day per 100,000. An Adar of more than 7 is considered high risk.

On the new Omicron subvariant, Flahault, director of the University of Geneva’s Institute of Global Health, said the watchword was not panic but “vigilance” as “for now we have the impression (BA.2 case) severity is comparable to” classic variant Omicron cases.

“But there are numerous questions on the table” and a need to monitor properties of the new variant on the block.

“Very early observations from India and Denmark suggest there is no dramatic difference in severity compared to BA.1,” tweeted Tom Peacock, a virologist at Imperial College, London, adding the latest variant should not call into question the effectiveness of existing vaccines.

Peacock stressed that “we do not currently have a strong handle on … how much more transmissibility BA.2 might have over BA.1. However, we can make some guesses/early observations.”

He added that “there is likely to be minimal differences in vaccine effectiveness against BA.1 and BA.2. Personally, I’m not sure BA.2 is going to have a substantial impact on the current Omicron wave of the pandemic.

“Several countries are near, or even past the peak of BA.1 waves. I would be very surprised if BA.2 caused a second wave at this point. Even with slightly higher transmissibility this absolutely is not a Delta-Omicron change and instead is likely to be slower and more subtle,” he forecast.

French Health Minister Olivier Veran said on Thursday that BA.2 did not look as if it would prove a game changer as variants appear on the scene “fairly regularly.” But he indicated he would reserve judgment.”

“What we know for now is that (BA.2) more or less corresponds to the characteristics that we know of Omicron” mark one.

—With reports from AFP AND JANE BAUTISTA INQ