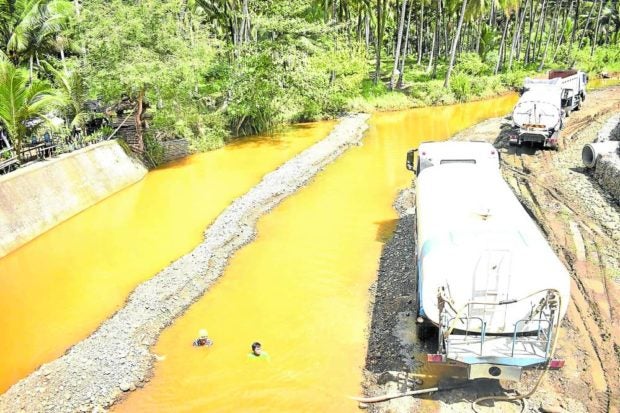 DAVAO CITY, Philippines —Davao Oriental Gov. Nelson Dayanghirang has asked the Department of Environment and Natural Resources (DENR) to cancel the permit of the mining companies whose activities caused the massive pollution of Mapagba and Pintatagan rivers in Banaybanay town.

In a Jan. 20 letter to Environment Secretary Roy Cimatu, Dayanghirang said the mining companies Riverbend Consolidated Mining Corp. (RCMC) and its operator, Arc Nickel Resources Inc. (Anri), must not be allowed to resume operations because their activities had resulted in massive siltation and discoloration of the rivers.

The Banaybanay mines are covered by a mineral production sharing agreement covering over 6,000 hectares between the government and RCMC, although these are operated by Anri. A 2016 environmental impact assessment showed the company’s plan to extract 9,600 wet metric tons of nickel ore per year from two mines sites for the next eight years.

However, an investigation by the province’s technical personnel showed that the siltation ponds built by Anri were “not wide and deep enough, causing the discolored water discharges to overflow while some portions of discharges were not directed to the catchment ponds,” said Dayanghirang in his letter.

The governor added that the mining operator did not have enough environmental mitigating measures and preparedness to address unforeseen events, which was a “blatant disregard of the company to its environmental protection and enhancement commitments …”

Dayanghirang sent the letter to the DENR after he and Secretary Maria Belen Acosta, chair of the Mindanao Development Authority, inspected the area following the order of the Mines and Geosciences Bureau for the temporary closure of the mining operation.

Although he acknowledged the contribution of the mining industry to the economy of the country, Dayanghirang said its impact to the environment outweighed the benefits.

“For a while, it may provide benefits in terms of income for the local and the national governments. But our people and our environment will suffer the long-term effects of irresponsible mining. We can still manage without it. Environment protection and conservation should be prioritized above everything else,” he added.

Acosta said there was a need for the government to review the mining policies following the incident.

“Economic development and environmental protection should go hand in hand. They should not cancel each other. Sustainable growth is the way to go,” Acosta explained.

The government has reported that the companies have started desilting Mapagba River. It has also distributed food assistance to those affected by the siltation and has since planned to start reforestation activities and other initiatives to rehabilitate the area.

The municipal government of Pantukan in Davao de Oro province has also filed a resolution asking the national government to stop the operations of the mining area in Davao Oriental as a result of the recent siltation and discoloration of its water sources.

The two provinces are both known for hosting considerable mineral deposits, but it is in Davao Oriental where nickel is concentrated, while Davao de Oro mining activities have been focused on extraction of gold. INQ