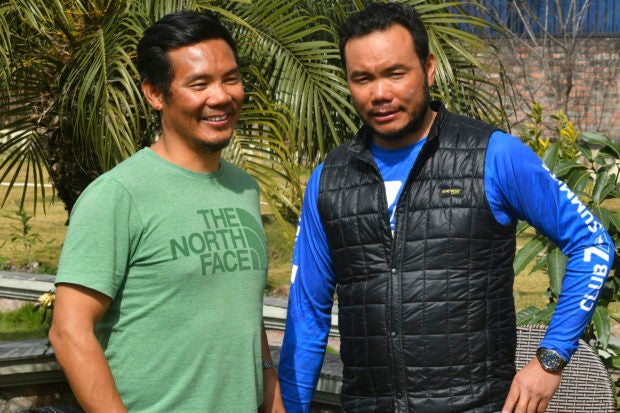 In this picture taken on on January 21, 2022, mountaineer brothers Tashi Lakpa Sherpa (L) and Chhang Dawa Sherpa pose for a picture upon their arrival in Kathmandu after summiting Antarctica’s highest peak Mount Vinson and skiing to the South Pole. – Two out of three Sherpa brothers have proudly returned home after becoming the first Nepalis to reach the South Pole, part of their mission to achieve the hallowed Explorer’s Grand Slam. (Photo by PRAKASH MATHEMA / AFP)

KATHMANDU — Two out of three Sherpa brothers have proudly returned home after becoming the first Nepalis to reach the South Pole, part of their mission to achieve the hallowed Explorers’ Grand Slam.

“We saw flags of many countries, but the flag of our country was not there,” Chhang Dawa Sherpa said after returning from Antarctica where they also ticked off the 4,892-meter (16,050-feet) Mt. Vinson.

“We felt very happy to add Nepal’s flag there,” he told AFP on Friday.

Sherpa and his elder sibling Mingma — due back in Nepal in the coming weeks — already hold the record for the first siblings to climb the 14 highest mountains in the world.

Their little brother, Tashi Lakpa Sherpa, holds the crown as the youngest person, at 19, to climb Everest without using supplementary oxygen.

For the Explorers’ Grand Slam the siblings still have to climb another five peaks and reach the North Pole, but they are confident they can complete it within a year.

The brothers run the aptly named Seven Summit Treks in Kathmandu, the largest expedition organizer in Nepal, taking hundreds of climbers up Himalayan peaks every year.

Nepali guides — usually ethnic Sherpas from the valleys around Everest — are considered the backbone of the climbing industry in the Himalayas for bearing huge risks to carry equipment and food, fix ropes and repair ladders.

Long under the shadow as supporters of foreign climbers, Nepali mountaineers are slowly being recognized in their own right.

Last year, a team of Nepali climbers made the first winter assent of K2, the world’s second-highest peak — the notoriously challenging 8,611-meter (28,251-feet) “savage mountain” of Pakistan — shining a much-deserved spotlight on their own climbing prowess.