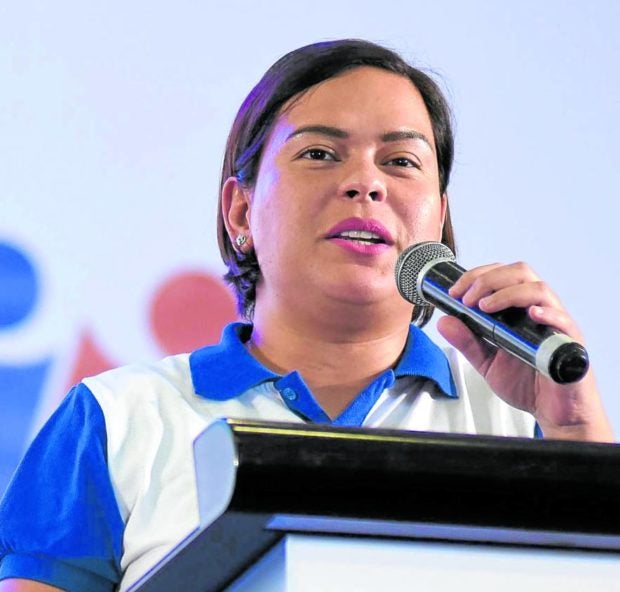 The Cusi wing of the Partido Demokratiko Pilipino-Lakas ng Bayan (PDP-Laban) has adopted Davao City Mayor Sara Duterte as its official vice presidential candidate in the May 2022 elections.

In a statement on Friday, PDP-Laban’s Cusi wing party said it was now “finalizing the terms of its alliance agreement with Lakas-CMD (Lakas-Christian Muslim Democrats), which Mayor Sara currently chairs.”

Sen. Ramon Revilla Jr., Lakas-CMD cochair, confirmed the “union of two most dominant political parties” in a separate statement and that they were “now finalizing the terms of their alliance.”

The PDP-Laban faction, headed by Energy Secretary Alfonso Cusi, made the announcement two weeks before the start of the campaign period for national candidates, which will begin on Feb. 8.

“We are now on our way to launching our campaign for Mayor Sara, and we assure all PDP-Laban candidates that the party is committed to support all of your candidacy,” the statement added.

But there was no mention of the mayor’s running mate, former Sen. Ferdinand “Bongbong” Marcos Jr., who is seeking the presidency under the Partido Federal ng Pilipinas.

The mayor’s father, President Duterte, earlier belittled Marcos as a “spoiled, weak leader” before she announced she would run for vice president under the former senator.

The Marcos camp, however, simply said it had the “utmost respect” for PDP-Laban’s decision to adopt Duterte as its vice presidential bet.

“As far as the Partido Federal ng Pilipinas, the party of presidential aspirant Bongbong Marcos, and the UniTeam (alliance with Lakas-CMD) are concerned, such ‘adoption,’ though a unilateral move by the PDP-Laban (Cusi faction), deserves our utmost respect,” lawyer Vic Rodriguez said.

Marcos has led, with resounding margins, at least two voter preference surveys of the Social Weather Stations and Pulse Asia.

In an online press briefing on Friday, Cusi said his faction was still scrutinizing the lineup of presidential candidates before deciding on an endorsement.

But the Cusi wing does not even have an assurance that it would enjoy the benefits of being named the dominant party because the Commission on Elections has not even ruled on the party leadership dispute between the Cusi wing and the faction led by Sen. Aquilino Pimentel III, son of the party’s founder, who is backing the presidential bid of Sen. Manny Pacquiao.

A member of the Pimentel wing, former Eastern Samar Gov. and Senate Secretary Lutgardo Barbo who is running for senator, slammed the Cusi wing’s move to adopt Duterteas a “desperation to hold to power.”

“Mayor Duterte has rejected them many times and has even made pronouncements throwing insults to the party,” Barbo said.