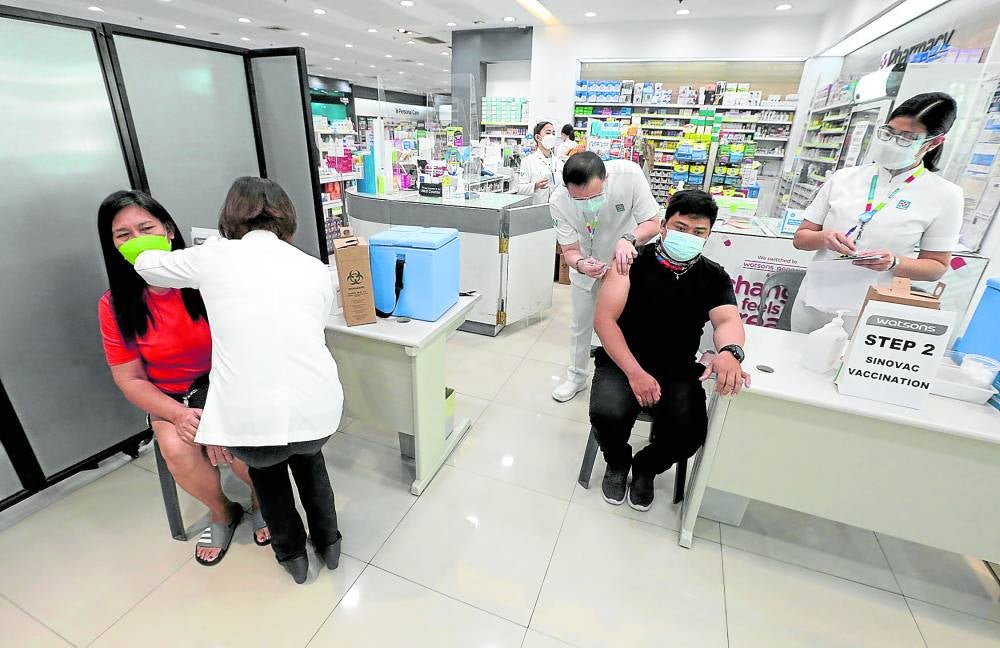 FORCE MULTIPLIERS Pharmacists administer COVID-19 vaccines inside a Watsons branch at SM Supercenter in Pasig City on Thursday, as the government expands the immunization drive to include drugstores and some clinics as new venues for the jabs. Five pharmacies and two clinics in Metro Manila are initially participating in the Resbakuna sa mga Botika program. —GRIG C. MONTEGRANDE

The vaccination drive took off at new venues on Thursday with the rollout of booster shots at privately owned pharmacies and clinics in Metro Manila.

This move was meant to address the rising number of health-care workers and vaccinators getting infected, which hampered the vaccination campaign, and to make the vaccine more accessible.

The shots made by Sinovac and AstraZeneca will initially be made available so that pharmacists who would be administering the jabs could become accustomed to handling these vaccines, which could be stored in regular refrigerators, according to Health Undersecretary Myrna Cabotaje.

“And then after the phase 1 and the phase 2, we will see if we could provide them with other brands because Pfizer and Moderna need a bit more sensitive handling,” Cabotaje said at the Laging Handa briefing.

Five drugstores and two private clinics are involved in the initial phase of this program, and each would be given 50 to 100 doses a day.

Booster dose recipients have to register with their local governments.

Cabotaje said that after the first week, the program would be expanded to the rest of the National Capital Region (NCR). By the second or third week of February, it could be launched in other regions, depending on “who is willing and ready.” “In the long run, if this turns out well, the extra sites and extra hands would be a big help to the local government units,” she said. For transport sector

As of Jan. 19, the Philippines has fully vaccinated 56.44 million individuals. Some 5.61 million have received their booster shots. The Department of Transportation (DOTr) on Thursday said it would help the vaccination drive among unvaccinated transport workers and commuters following criticisms that it was limiting the movement of the public through its “no vaccination, no ride” policy instead of convincing people to get jabbed.

She told the Inquirer that since it was launched on July 31, 2021, 4,572 people had been vaccinated at the Parañaque Integrated Terminal Exchange (PITX) and 3,813 more at other sites in partnership with GoNegosyo, or 7,755 in total.

The inoculation schedules depended on the availability of vaccines, Libiran said.

The DOTr and the Metropolitan Manila Development Authority will again hold daily vaccinations for commuters and transport workers from Jan. 24 to Jan. 28, 8 a.m. to 12 noon, at PITX, she said.

The AstraZeneca vaccine would be administered as first and second doses, or as a booster shot, Libiran said. The DOTr plans to administer 500 doses per day. It will be open to walk-ins who must register on site, she said.

Aside from PITX, Libiran told the Inquirer there would also be vaccinations at seaports, rail stations and even at toll roads. She did not say when these would start.

Libiran said the exemptions were disclosed in the department order that was published in newspapers on Jan. 12.

The published order, however, cited only several not all of the exemptions. It did not specify the exemption of unvaccinated workers in “essential” industries which are allowed to operate under the current alert level status in NCR.

Libiran stressed that the exemptions under the DOTr’s order were in line with the guidelines of the government’s pandemic task force “on those who are allowed to work in essential industries under alert level 3.”

But this was not mentioned in the published order and was only cited after Labor Secretary Silvestre Bello III clarified that workers were exempted and several groups and lawmakers criticized the policy for being “discriminatory.”

Cabotaje also announced that people who had received the vaccine made by China’s Sinopharm as their primary dose would have to wait for the recommendation on what booster shot they should get.

She said the country’s experts have yet to come up with a recommendation because of inadequate data submitted to the Food and Drug Administration (FDA).

According to an FDA report on Jan. 9, there were 467,305 people who had completed their doses of the Sinopharm vaccine since Aug. 25, 2021.Malacañang had said President Duterte was among those who had received Sinopharm’s vaccine.

The Sinovac vaccine, also made in China, is undergoing a “mix-and-match” clinical trial involving 347 people, according to Dr. Rowena Cristina Guevara, undersecretary for research and development of the Department of Science and Technology on Wednesday.She said 184 of them received a second dose of a different vaccine, either Pfizer, Moderna, AstraZeneca or Sputnik V.

Among other things, the study aims to determine if those who have receive the first dose of Sinovac, the country’s most common vaccine brand, will have a better immune response if given a second dose of a different brand.

Guevara earlier said the plan is to have 3,000 participants for the study, which was approved by the FDA in November 2021, and was expected to last for one year and a half. —WITH REPORTS FROM JEROME ANING AND INQUIRER RESEARCH