PH 51st on list of world’s most powerful militaries 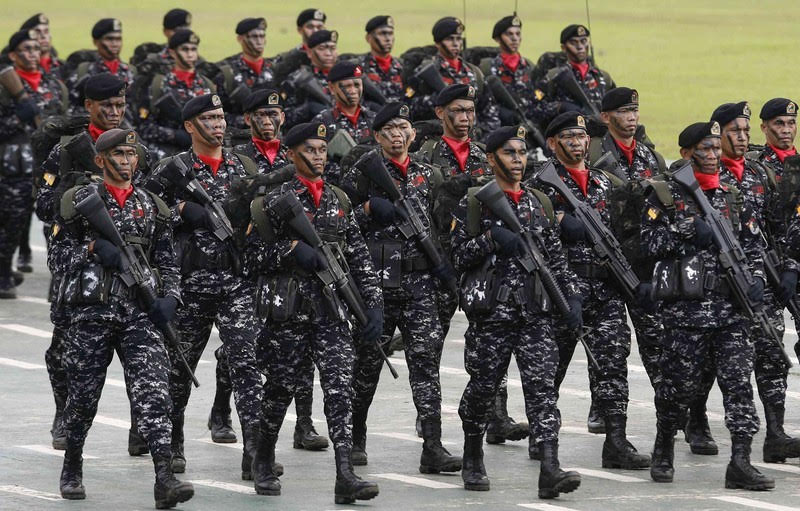 MANILA, Philippines—The Philippines, with an estimated 48 million available military manpower and at least 280,000 total military personnel, ranked 51st among 140 countries in terms of military strength in 2022.

According to the annual Global Firepower (GFP) report, the Philippine military—with around 130,000 active military personnel, 100,000 reserves, and 50,000 paramilitaries— had a PowerIndex score of 0.81.

The GFP ranking analyzes and ranks 140 countries based on each nation’s “potential war-making capability across land, sea, and air fought by conventional means.”

The ranking “utilizes over 50 individual factors to determine a given nation’s PowerIndex score with categories ranging from military might and financials to logistical capability and geography.”

A PowerIndex score of 0.00 is considered perfect, but the GFP noted that it is realistically unattainable.

In this article, INQUIRER.net will try to detail the country’s good and bad points in terms of military strength based on data provided in the 2021 GFP report, as well as list which countries dominate globally with their military strength.

Based on the GFP data, the Philippines had excellent, good, average, fair, and poor ratings in over 40 factors.

The country garnered an excellent rating—which means that it ranked between 1 to 25 among the 104 countries—in the following factors:

The total population of a country was used as the “starting point for all other population-related values” which included active labor force, available military manpower, and those who are fit for military service.

“Typically the higher the base population, the larger the military fighting force,” the GFP noted.

This factor refers to the available manpower in the country, which the GFP said proves critical in any conflict, “particularly drawn-out ones.”

The GFP formula theorized that if a country has a large population, it will have the benefit of having more “souls to the fight” in the form of combat personnel, labor force, and the like.

One of the most crucial factors in the GFP is the proportion of the country’s available manpower that is fit for military service. This factor is essential in determining the possible victor in wars, according to GFP.

“[I]t represents the portion of a given population that is (theoretically) available to assist in a war effort,” the GFP said.

“This assumes able-bodied persons suitable for the fighting and material production involved in waging a long-running campaign,” it added.

Countries with a high population, like the Philippines, ranked high in this factor as the GFP assumed that such countries will have more personnel who are capable of offering military service or assistance.

The military age factor tracks the portion of the population that is set to reach military age annually—“a refining factor used in considering overall military manpower for a given nation.”

In this case, the number of the country’s total population does not mean that there will be a high or low portion of able-bodied personnel suitable for fighting.

The Philippines ranked 22nd out of 104 countries, which means that the country has one of the highest portions of personnel considered under “reserve status”—or those that are available or on-call for service at any given moment.

This factor tracks the aircraft of each nation which is “specifically designed to attack ground targets by way of broader support for various air-to-ground munitions.”

Separate from the aircraft under the attack aircraft strength factor, the Special Mission Aircraft, according to the GFP, refers to those that are specifically developed to “undertake an over-battlefield role by utilization of advanced onboard equipment or specialized trait.”

Among the countries evaluated by GFP, the Philippines was among the top 15 nations with the highest number of frigate warships.

These warships, the GFP explained, are used for fleet surface ship protection against enemy surface combatants or incoming aerial threats.

“Frigates are outfitted with advanced sonar, sensory and tracking systems that allow her crew to hunt down enemy submarines,” the GFP said.

“Nearly all notable naval powers make use of the multi-role frigate in their inventory,” it added.

The country again ranked 15th in the list of countries with the strongest corvette fleet. Based on the GFP data, the Philippines owns one corvette warship.

Corvettes are warships that are smaller than frigates, which supply a balanced mix of firepower, ocean-going capabilities, and rotary-wing support “while presenting reasonable economic benefits in terms of construction and procurement costs.”

The country was also at the higher end of the list of countries with the highest number of offshore patrol, missile boats, or riverine combat warcraft.

“Patrol elements are called upon to defend offshore areas of importance from enemy incursion,” the GFP said.

“During peacetime, this may include interception of illegal drugs while, during wartime, this would include defense of critical waterways and offshore positions that threaten vital shipping lanes,” it added.

The Philippines’ total labor force—an estimated 41,533,000 by the GFP—has brought the country to the top 15 of the list for the labor force factor.

The merchant marine of a country, the GFP explained, “is a force of ships operating under civilian banners in peace time and, in times of war, commissioned by the naval branch of service to augment the main surface fighting force.”

During wars, merchant marine vessels are utilized to transport soldiers, vehicles, and supplies.

This factor analyzes each country based on total available trade terminals and seaports.

The GFP uses this factor to measure a country’s economic strength in moving, sending, and receiving goods—including military supplies—from all over the world.

Roadways, in the GFP data, refer to the usable or useful roadway coverage which can provide critical access to industrial sectors, terminals, and ports – all needed for proper mobilization during a war.

“Airports assist in a county’s economical health as well as general logistics, becoming crucial during wartime operations in moving both men and supplies. As such, airports become primary targets for an attacking nation in Total War,” the GFP noted.

The data counted major airports in their rankings.

While there were areas where the Philippines had high or excellent ratings, the country was also given very low ratings in other factors under the GFP ranking.

The country has specifically gained “poor” ratings in nine factors including:

This factor under the GFP rankings tracks aircraft that are “specifically designed to attack ground targets by way of broader support for various air-to-ground munitions.”

According to the GFP data, the Philippines has no fighter or interceptor aircraft, which has placed the country in the lowest rank on the list based on this factor.

The Philippines also has no tanker aircraft fleet, based on data from the GFP, therefore putting the country in the lowest rank.

Tanker fleets were considered a vital component in projecting and sustaining airpower.

“Due to specialized training and cost, only a select few national powers are able to field such aircraft fleets with the United States leading the way—by a large margin,” the GFP noted.

This factor helps rank the countries based on the number of self-propelled Multiple Launch Rocket Projector (MLRS) vehicle fleets they own or possess.

The total number of aircraft carrier warships was also among the factors included in the GFP.

Aircraft carriers, according to GFP, “remain the flagship of the most powerful navies of the world with the United States leading the way.”

The other factors wherein the Philippines ranked last on the list of 140 countries were:

However, the country ranked a bit higher in terms of the total railway coverage by country.

The country, based on GFP data, has a total of 77 railway coverage—which can provide vital tactical flexibility during both wartime and peacetime industries.

“In the event of Total War, railways are crucial to the mobilization of military elements,” the GFP explained.

“The network also provides needed access to strategic areas, movement of very-heavy equipment and supplies, and showcases infrastructure maturity of a given nation,” it added.

The good, average, and fair points

The Philippines has likewise gained some good, average, and fair ratings in several factors included in the GFP.

Such ratings have placed the country between rank 26 to 118 in at least 23 factors, including:

So, who has so far dominated this year’s GFP rankings based on those factors? 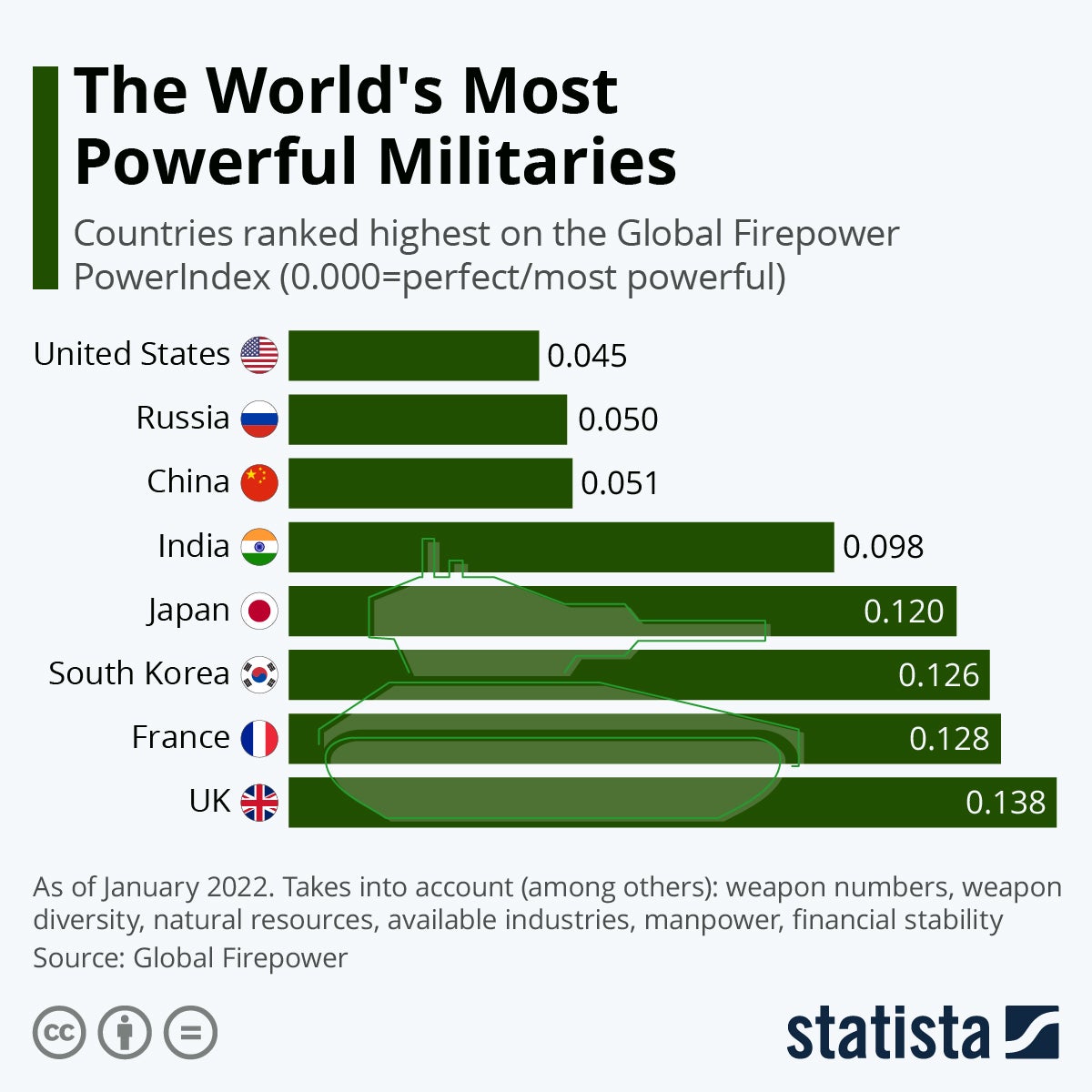 Based on the GFP list, these are the top 10 most powerful militaries in the world:

“When it comes to manpower, no military in the world comes close to that of China. According to Global Firepower estimates, the People’s Republic has around 2 million active military personnel,” explained Martin Armstrong of data consumer company Statista.

“The United States in comparison, has significantly less—1.4 million—but when assessing the overall power of the world’s military forces, the U.S. comes out on top, ahead of Russia and China in second and third, respectively,” he added.

Based on the GFP data, the US had an excellent rating in 41 factors, a good rating in one, a fair rating in another factor, and four other factors.

Russia, on the other hand, had excellent ratings in 43 factors, one factor with fair rating, and poor ratings in three factors.

For China, there were excellent ratings in 44 factors, a fair rating in one factor, and two factors with poor ratings.

“With Russian military buildup around Ukraine and increasingly aggressive posturing from the Kremlin, the chances of at least one of the world’s most powerful militaries applying its strength in a major new conflict appear to be at their highest for some time,” Armstrong explained.

“Diplomatic efforts have so far failed, and it now remains to be seen how Russia will act. Elsewhere, the risk of China and the United States clashing in some form over Taiwan remains ever-present,” he added.