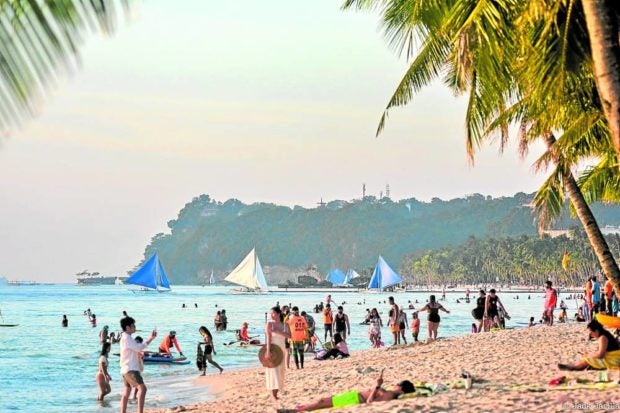 STRICT AGAIN Despite the pandemic, tourists endure the processing of requirements so they can relax in Boracay. Visitor arrivals are high until the second week of January when restrictions have been tightened on the island in Malay, Aklan, following another spike in COVID-19 cases. —JACK JARILLA

The average daily tourist arrivals on the island in Malay, Aklan, also went down from 3,155 in the first week of January to 352 last week.

COVID-19 alert levels and corresponding travel restrictions in Metro Manila and other areas were implemented on Jan. 9 amid a sharp increase in cases attributed to the highly transmissible Omicron variant.

The Aklan provincial government reinstated the requirement of a negative swab test result for tourists visiting the island regardless of vaccination status.

Operating hours of businesses on the island have also been limited starting Jan. 9 from 5 a.m. to 9 p.m. while curfew has been lengthened to six hours from 10 p.m. to 4 a.m. The operation of public transportation on the island is allowed only from 4 a.m. to 10 p.m.

A liquor ban is in effect in public areas and in entertainment venues with live bands.The drop in tourist arrivals followed the pandemic-high 113,596 tourists in December, the highest since January 2020.

Business operators and residents were hoping that the influx of tourists would continue after almost two months of economic slump due to the lack of visitors.

Aklan province and Iloilo City have been classified as “critical” areas in Western Visayas due to sharp increase in COVID-19 cases, according to a Jan. 16 report from the Department of Health (DOH) in the region.

Bacolod City and the provinces of Antique, Capiz, Guimaras and Iloilo are categorized as “high risk.”

The DOH reported 819 new cases with 6,678 active cases in the region on Jan. 16. The average daily number of cases also increased from 26 in December to 333 in January.

But the DOH said utilization of hospital beds and equipment remained at “low risk” in the region despite the surge.