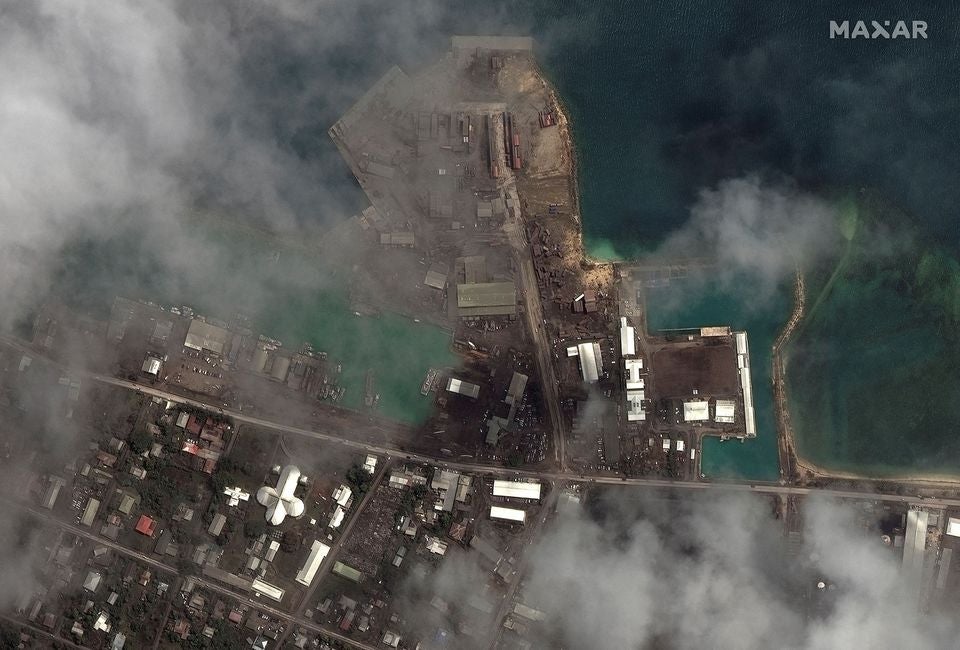 WELLINGTON — Aid agencies reported “extensive damage” in the Pacific island nation of Tonga on Tuesday following a massive underwater volcanic blast and tsunami, as the first death from the disaster was confirmed.

Early indications of the scale of the crisis on the virtually cut-off island kingdom were emerging through patchy satellite phone contact with Tonga, surveillance flights and satellite images, three days after the volcanic eruption.

The body of a British woman swept away by the tsunami had been found, her family said. At least one other person in Tonga was reported missing.

The UN said a signal had been detected from a distress beacon on a low-lying island, Mango.

The UN Office for the Coordination of Humanitarian Affairs (OCHA) said surveillance flights had confirmed “substantial property damage” on Mango and another island, Fonoi.

“An active distress beacon had been detected from Mango,” OCHA agency said in an urgent report. The island is home to more than 30 people, according to Tongan census figures.

OCHA also reported “extensive damage” on the western beaches of the main island Tongatapu, “with several resorts and/or houses destroyed and/or badly damaged”.

Tonga’s capital Nuku’alofa was blanketed in two centimeters of volcanic ash and dust, it said. Power had been restored to parts of the capital. Local phones systems had been restored but international communications were severed.

The capital’s waterfront, it said, was “seriously damaged with rocks and debris pushed inland from the tsunami”.

Satellite images released by the United Nations Satellite Centre showed the impact of the eruption and tsunami on the tiny island of Nomuka, one of the closest to the Hunga-Tonga-Hunga-Ha’apai volcano.

The satellite centre said of 104 structures analyzed in the cloud-free area, 41 structures were identified as damaged and almost all were covered with ash.

Tonga’s airport had expected to clear volcanic ash from the capital’s runway by Monday, OCHA said.

Australia said the ash must be cleared before it can land a C-130 military plane with aid.

‘Cling on to a tree’

The first confirmed death was Angela Glover, a 50-year-old who ran a stray animals charity and was reported missing by her husband after the tsunami hit.

“Earlier today my family was sadly informed that the body of my sister Angela has been found,” her brother Nick Eleini said after being given the news by the husband, James Glover.

“James was able to cling on to a tree for quite a long time, but Angela was unable to do so and was washed away with the dogs,” he told The Guardian newspaper.

Tonga’s worried neighbors are still scrambling to grasp the scale of the damage, which New Zealand’s leader Jacinda Ardern said was believed to be “significant”.

Australia’s HMAS Adelaide, and New Zealand’s HMNZS Wellington and HMNZS Aotearoa were deployed in case of any aid request from Tonga, which lies three days’ sailing away.

Water is expected to be a priority, New Zealand’s defense minister said Tuesday, as water sources in Tonga are at risk of being poisoned by the volcanic fallout.

France, which has territories in the South Pacific, pledged to help the people of Tonga’s “most urgent needs” in cooperation with Australia and New Zealand.

Major aid agencies, which would usually rush in to provide emergency humanitarian relief, said they were stuck in a holding pattern, unable to contact local staff.

“From what little updates we have, the scale of the devastation could be immense — especially for outlying islands,” said Katie Greenwood, IFRC’s Pacific Head of Delegation.

Even when relief efforts get under way, they may be complicated by Covid-19 entry restrictions. Tonga only recently reported its first-ever coronavirus case.

Saturday’s volcanic blast was one the largest recorded in decades, erupting 30 kilometers (about 19 miles) into the air and depositing ash, gas and acid rain across a swathe of the Pacific.

The eruption was recorded around the world and heard as far away as Alaska, triggering a tsunami that flooded Pacific coastlines from Japan to the United States.

The eruption severed an undersea communications cable between Tonga and Fiji that operators said would take up to two weeks to repair.

“We’re getting sketchy information, but it looks like the cable has been cut,” Southern Cross Cable Network’s networks director Dean Veverka told AFP.