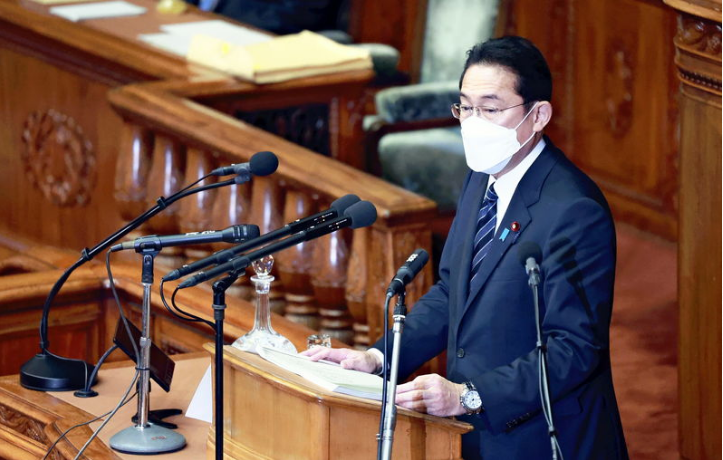 Prime Minister Fumio Kishida delivers his policy speech at a plenary session of the House of Representatives on Monday. | PHOTO: The Yomiuri Shimbun via The Japan News/Asia News Network

TOKYO — Prime Minister Fumio Kishida pledged in his policy speech upon convening the ordinary Diet session Monday to not only handle the pandemic, but also double “investment in human resources.”

Kishida stressed in his speech to both chambers of the Diet to implement “unambiguous measures based on the characteristics of the omicron variant” of the novel coronavirus. The aim is to avert putting the medical system in a tight situation.

Hospitalization and related medical care will be enhanced to mainly focus on serious and moderate COVID-19 cases, Kishida said, while systems to allow mild and asymptomatic patients to recuperate at home or accommodation facilities will be prepared.

“An emergency where the situation regarding hospital beds becomes tight must be avoided by all means,” Kishida said.

The prime minister also expressed his intention to flexibly alter COVID-19 measures based on changes in the infection situation and the opinions of experts.

Regarding booster shots of COVID-19 vaccines, Kishida explicitly expressed his desire to shorten the period from eight months to six or at least seven months from the second shot for residents under 65 who are not medical workers. He hopes the six-month time frame will be possible from March “for local governments with extra capacity.”

On his signature policy of realizing a “new form of capitalism,” the prime minister emphasized the importance of investing in human resources through such methods as vocational training and education. The prime minister said he will seek to increase investment in the public and private sectors to “at least double at an early stage, and then even more above that.”

Kishida also expressed expectations for wage hikes resulting from this spring’s labor-management negotiations. The prime minister said he will work toward realizing at an early date a minimum wage of ¥1,000 or higher in the weighted national average.

Toward achieving net-zero emissions of greenhouse gases in 2050, the prime minister said he is determined to double investment in changing the socioeconomic system to a carbon neutral one. He hopes to urge the public and private sectors to share the same overall picture of such a society.

On the diplomatic front, Kishida shed light on a plan to create a world free of nuclear weapons by establishing a “global council of wise persons.” He aims to organize the inaugural meeting in Hiroshima of this group of political leaders and eminent individuals sometime this year.

The prime minister reiterated that he will examine all possible options, including the “capability to attack enemy bases,” as measures to drastically enhance the nation’s defense.

As for relations with China, Kishida said he will “aim to build constructive and stable relations” with the neighbor, keeping in mind the 50th anniversary of the normalization of Japan-China diplomatic relations.

With regard to negotiations with Russia on the return of Japan’s northern territories, Kishida said he will continue the exchanges between the leaders of the two nations that started in 2018. That was when Tokyo and Moscow agreed that the negotiations should be based on the 1956 Japan-Soviet Joint Declaration, which explicitly mentions the return of Shikotan island and the Habomai isles, two of the four northern territories, after a peace treaty is concluded.

The ordinary Diet session will run for 150 days, through June 15.